Another Pair of Shields Over the Doorway


In my last post, I shared some pictures of a pair of shields over a doorway on the ground floor of Mount Stuart.

Today, we're looking at a similar pair of shields, with different arms on them, from a similar doorway (again, between rooms with that wonderful carved heraldic ceiling). 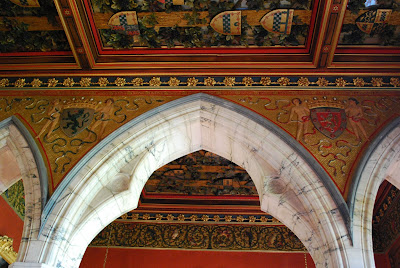 The arms here are proving a little tougher to track down, though they share the nude supporters and both are surmounted by the coronet of a marquess.

The shield on the left would be blazoned Argent a lion rampant sable armed and langued gules. 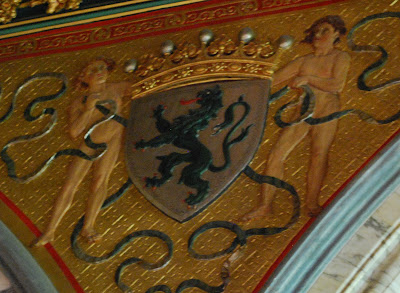 Papworth's Ordinary of British Armorials notes over twenty families (and even more branches of families) bearing this coat of arms. Without finding someone with a distinct connection to the Crichton-Stuart family, it is difficult to narrow down the likely owner of this coat of arms.

The shield on the right would be blazoned Gules a lion rampant within a bordure or charged with eight roses gules barbed and seeded proper. 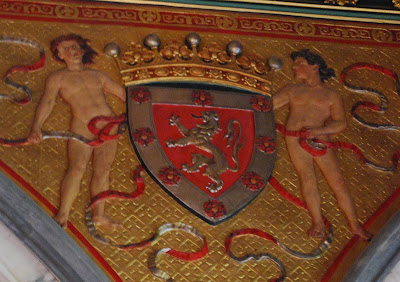 Papworth's Ordinary of British Armorials gives this coat of arms as that of Dunbar, but as a quartering with Randoph. Burke's Peerage cites several Dunbar baronets, all of whom bear Dunbar quartered with Randolph (Or three cushions within a double tressure flory counter-flory gules), with various differences between them.

I am not finding any Dunbar family connections to the Crichton-Stuarts sitting here with Burke's Peerage cutting off the circulation in my lap. (Well, it is a large book, after all!)

I am unable at this time to give you a positive identification of the origins for either of the coats of arms depicted here. Clearly there is some relation to the Marquess of Bute; why else would they have been carved or molded onto the walls of his house? But without the who, I cannot even speculate as to the why.