A couple of conversation threads on Facebook and a recent news article on the web have brought to my attention the fact that the Craigie Primary School in Perth, Scotland, has run afoul of the office of the Lord Lyon King of Arms for using an unregistered armorial device as their badge. Their badge came to the attention of Lyon after the school tried to design a wall mural.

Scotland, in case you didn't already know this, is pretty much the only country in the world with the legal "teeth" to enforce heraldic law. Which means he can require individuals and corporate entities displaying or using heraldic devices in Scotland to regularize them by registering them with his office, or demand that they cease such use and display. (I don't know that Lyon ever has, but he has the right to send people out to take down, mar, and/or deface any such displays which are not in conformance with the Lord Lyon King of Arms Act of 1672.)

In this specific instance, a spokeswoman for the Court of the Lord Lyon (presumably Snawdoun Herald Elizabeth Roads) said: “Every school badge has to be registered if it is heraldic. If they are not registered, the school or organisation must cease using them.”

Much of the discussion back and forth in comments on the news article and on the Facebook posts seems to center around: (1) whether the school's badge is "heraldic;" and (2) whether Lord Lyon should waive the registration fee for a primary school.

For the first argument, that the school's badge isn't really heraldry, let's take a look at what they have been using. 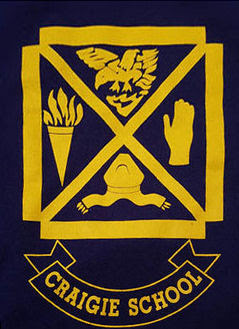 Well, it's certainly not classic heraldry, is it? And it's not on any of the standard shield shapes.

The standard shield shape seems to be the underlying argument by those who think that Lord Lyon should let this badge slide. And yet ... A.C. Fox-Davies, in his A Complete Guide to Heraldry, notes that "Arms [may] be depicted upon a banner, a parallelogram, a square, a circle, or an oval; and even then one would be correct, for the purposes of armory, in describing such figures as shields on all occasions on which they are made the vehicles for the emblazonment of a design which properly and originally should be borne upon a shield. Let no one think that a design ceases to be a coat of arms if it is not displayed upon a shield."

He then notes that on the Royal Warrants of Queen Elizabeth I commanding the heralds' Visitations during her reign, that the King of Arms to whom the warrant was addressed was to “correct, cumptrolle and refourme all mann’ of armes, crests, cognizances and devices unlawfull or unlawfully usurped, borne or taken by any p’son or p’sons within the p’vince contary to the due order of the laws of armes, and the same to rev’se, put downe or otherwise deface at his discrecon as well in coote armors, helmes, standerd, pennons and hatchmets of tents and pavilions, as also in plate jewells, pap’, parchement, windowes, gravestones and monuments, or elsewhere wheresoev’ they be sett or placed, whether they be in shelde, schoocheon, lozenge, square, rundell or otherwise howsoev’ contarie to the autentiq’ and auncient lawes, customes, rules, privilege and orders of armes.” (emphasis added)

In any event, you can see more about this controversy, some of the commentary, and how the school is dealing with it, on the web page of the Express at: https://www.express.co.uk/news/uk/960312/primary-pupils-school-craigie-primary-school-crest-lord-lyon-battle; and at The Courier at; https://www.thecourier.co.uk/fp/news/local/perth-kinross/655625/perth-pupils-told-to-raise-almost-2000-for-school-crest-following-legal-dispute/