Among the many heraldic stained glass windows to be seen at Mount Stuart was this pair of windows displaying some non-personal heraldry. 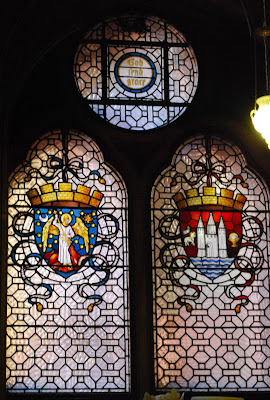 The window on the left displays a variant of the coat of arms of the Royal Burgh of Dumfries: 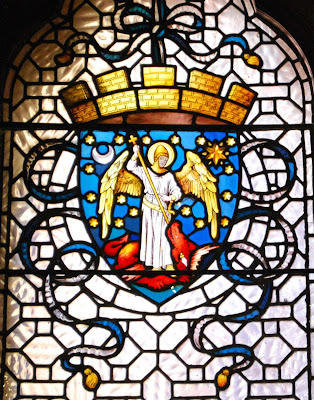 I say "a variant" since the depiction here leaves out the shield (Argent a cross gules) born by the Archangel, and shows him brandishing a staff to attack the dragon while his sword remains in its scabbard by his side. It has also changed (e.g., the placement of the sun and moon) or is missing (e.g., the cloud) a few other minor elements.

The blazon of the arms of Dumfries is as follows: Azure semy of estoiles or, standing on a cloud the figure of the Archangel Michael wings expanded brandishing in his dexter hand a sword over a dragon lying on its back in base with its tail nowed fessways all proper on his sinister arm an escutcheon argent charged with a cross gules, in dexter flank an increscent in the sinister flank the sun in his splendour of the second [or].

The arms in the window on the right are those of the Royal Burgh of Ayr: 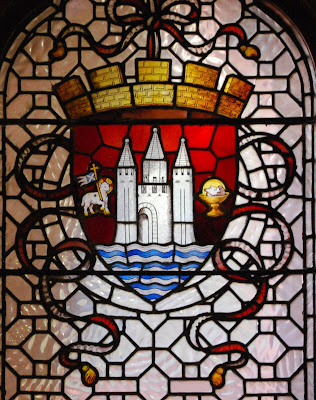 This coat of arms is blazoned: Gules a castle triple-towered argent betwixt a Holy Lamb cross staff and banner of Saint Andrew on the dexter and on the sinister the head of John the Baptist in a charger proper, in the base the sea azure.

As happens fairly frequently in heraldry, the water here ("the sea azure") is portrayed barry wavy argent and azure instead of plain blue. (We see this in other depictions of the arms of Ayr, too.)

As with the other stained glass windows at Mount Stuart, heraldic and otherwise, the workmanship is first-rate. And it's nice to see some non-family heraldry displayed there.