Tucked away in Mount Stuart we ran across a couple of items decorated with some Jacobite heraldry: the arms of Henry Benedict Thomas Edward Maria Clement Francis Xavier Stuart, the younger son of the Old Pretender, James Francis Edward Stuart, and brother of the Young Pretender, Charles Edward Stuart, "Bonnie Prince Charlie".

The grandson of deposed King James II and VII, Henry Benedict Stuart was the fourth and final Jacobite heir to publicly claim the thrones of England, Scotland, France, and Ireland. Unlike his father and his brother, he made no effort to seize the throne. Following the death of his brother, the Papacy did not recognize him as the lawful ruler of England, Scotland, and Ireland, but referred to him as the Cardinal Duke of York. He had been named Duke of York while in his youth by his father, and held a number of offices in the Catholic church, including Archpriest of St. Peter's Basilica. For more specifics on these, and on his life in general, see the Wikipedia article at https://en.wikipedia.org/wiki/Henry_Benedict_Stuart.

But more to the heraldic point here, during the pretense of his father and brother, he bore a coat of arms consisting of the Royal Arms of France and England quarterly, Scotland, and Ireland, differenced by a white crescent (the cadency mark of a second son).

Those arms were found in two places in Mount Stuart:

Prominently displayed on an old print: 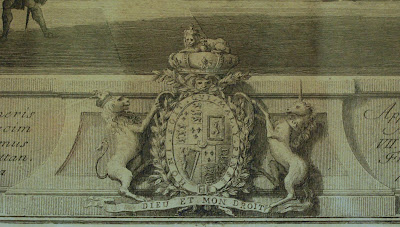 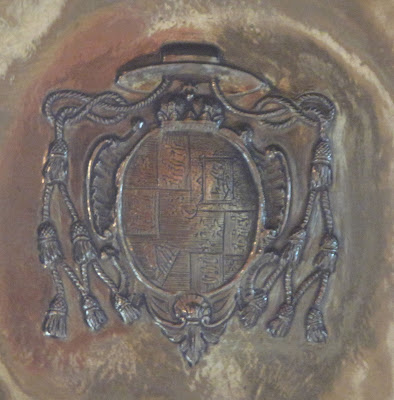 You can click on the pictures to see the full-size images, which more clearly show the crescent in the center.

I found these items to be a fascinating display of heraldry in the context of history, encompassing the history of both Great Britain and of Mount Stuart.