An Armorial Achievement to Sleep By

Another one of the bedrooms at Mount Stuart had a large bed surmounted by this amazing display of marital heraldry. 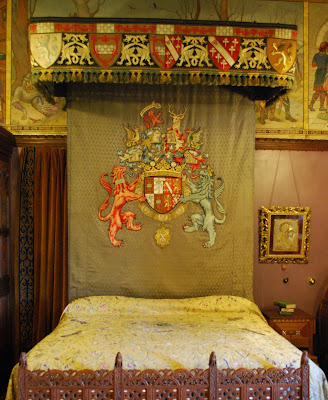 The most notable part of this display is, of course, the marital achievement of arms hanging at the head of the bed. 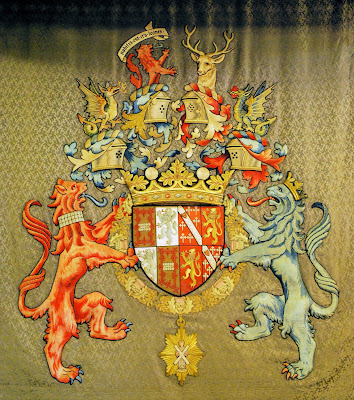 They are the marshalled arms of John Patrick Crichton-Stuart, 3rd Marquess of Bute (bearing Quarterly: 1 and 4, Or a fess checky azure and argent within a double tressure flory counter-flory gules (Stuart); 2 and 3, Argent a lion rampant azure (Crichton), impaled by the arms of his wife, Gwendolen Mary Anne FitzAlan-Howard, eldest daughter of Edward George Fitzalan-Howard, 1st Lord Howard of Glossop (the second son of the 13th Duke of Norfolk), Quarterly: 1 and 4, Gules a bend between six crosses crosslet fitchy argent, as an augmentation on the bend an escutcheon or charged with a demi-lion rampant pierced through the mouth by an arrow all within a double tressure flory counter-flory gules (Howard); 2 and 3, Gules a lion rampant or (Fitzalan).

The external ornaments of the shield (crests, supporters, coronet, collar of the Order of the Thistle) are all those from the husband's family. Three of the crests we have noted a number of times elsewhere in Mount Stuart as those of Stuart (the red demi-lion), Crichton (the wyvern breathing flames), and Herbert (the green wyvern holding a red hand in its mouth).

An additional heraldic decoration around the canopy over the bed was this:

The arms are, from left to right, those of: Crichton; Stuart; the marshaled arms of Stuart and Howard; Howard; and FitzAlan.

The narrow band above the shields is a repeating heraldic motif, Or a bar gemel flory counter-flory gules (modified from the double tressure of the shield), and A fess checky azure and argent (the checky fess of Stuart).

That's a lot of heraldic display for a bed! I'm not sure how comfortable I'd be sleeping in a bed like that. Although, I supposed that it's something that I could get used to. I'll have to talk to my wife to see how willing she would be to embroider an achievement of my arms to go up over the head of our bed. I'm sure she'd be fine with it, right?