A Successful Hunt for a Blazon


I always think that the late J.P. Brooke-Little said it best, in the introduction to his An Heraldic Alphabet:

You can study heraldry until you are azure ... in the face but inevitably discover, from time to time, that you really are quite vert.... I have found this over and over again but, never forget, herein lies the fun and if heraldry ever ceases to be fun- chuck it.


It is a truism which I find myself reminded of from time to time, and just the other day was another one of those times.

I'm in the middle of completing a big project which I am doing in order to better do another big project. (More about that second project another time, perhaps.) This project involves compiling the blazons of coats of arms from Florence into a single, and thus for me more easily usable, document.

The sources I am using consist of a book of blazons of Florentine heraldry in English done about 1900, a photo-reproduction of an old Florentine armorial with no blazons, and a compilation of several Florentine armorials with the blazons done in French. So as you can see, a diverse set of books!

Copying the English blazons into my document was pretty easy; converting it to Word from .pdf and then cleaning up the formatting and the places where it didn't recognize, or misrecognized, a word was comparatively simple. I expect that between my familiarity with blazon terms in English and general familiarity with many French blazons, I shouldn't have too much difficulty in translating those blazons from French to English, with occasional resort to a French heraldic dictionary and my pocket French-English dictionary.

It's the other book, of pictures of the pages of an old Florentine armorial but without any blazons, that taught me once again that I still have so much to learn about heraldry. In the course of going through that armorial page by page, I ran across several coats of arms with a charge I do not recall ever having seen before. This charge: 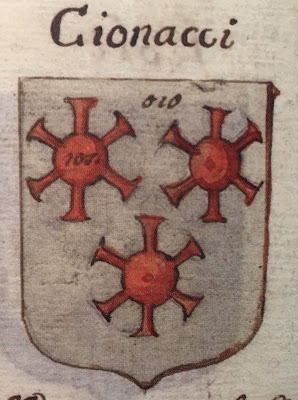 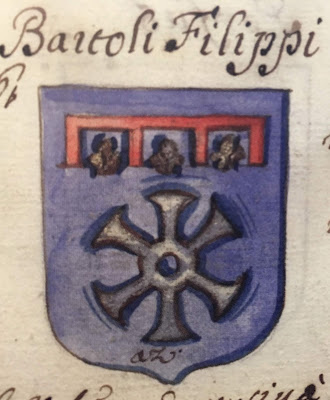 "Well," I said to myself, "it's not a cog wheel, exactly. The center of the wheel is too small, and the 'cogs' are way too long and they flare out a bit at the ends. But what is it?"

I didn't really want to flip through the entire Italian dictionary of heraldry that I have in the hopes of eventually finding a drawing of this charge, or at least something very similar. But then I thought, "maybe these same arms appear somewhere in the French book of Florentine heraldry. I wonder how they are blazoned there."

So I starting searching the index for the names and then looking up the blazons of the arms, and found this charge blazoned as a roue déjantée, which the on-line Bing translator (the word déjantée doesn't appear in my French-English dictionary) translated into English as a “crazy wheel.” Looking up "wheel" in my English-Italian dictionary gave me the word ruota, and looking under ruota in my Italian heraldic dictionary finally allowed me to identify this charge. It is a ruota di mulino: “É la ruota a pale, che veniva un tempo utilizzata dai mulini ad acqua.” (Dizionario di Araldica, di Valfrei, p. 173) It is a mill wheel (not to be confused with a mill stone!): “It is the paddle wheel, which was used once by the water mills."

So there you have it! A not-terribly-long, but involved, search through a number of books in three different languages, and success! I now feel slightly more azure in the face, and a little less vert. But it is just this sort of thing that keeps heraldry fun for me!