Following our visit to the Isle of Bute on the final day of our three-day heraldic tour around Glasgow and environs, we stopped for a final dinner in Greenock, Scotland.

As the bus pulled up to the small restaurant, I saw a house a few doors down with some heraldry on its facade. So naturally, while everyone else was getting off the bus and walking to the restaurant, I trotted down the street to grab a couple of quick photographs before joining them. 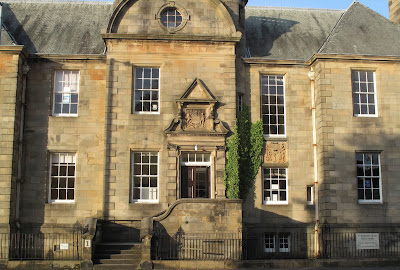 This photograph was taken from across the street, and gives you an overview of the view I had from the bus as we were pulling up. 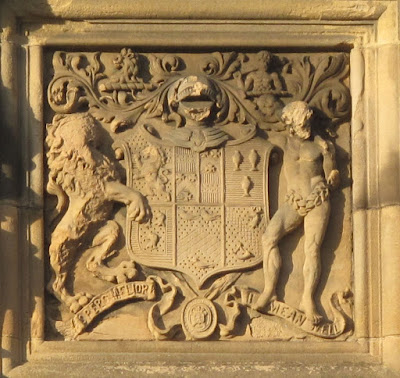 The arms over the doorway are fairly complex: six quarters, with the second one being grand-quartered, with two crests and two mottoes. (You can click on the picture above to see a larger image that shows these arms in greater detail.)

My rough blazon of the arms, based on the visible hatching, is: Quarterly of six: 1, Or a fess checky azure and or overall a lion rampant [Stewart]; 2, Quarterly, i and iv, Gules a fess ermine [or perhaps, on a fess some indeterminate charges?], ii and iii, Azure a chevron between three crosses paty; 3, Gules three covered cups; 4, Or three bird’s heads erased a bordure azure; 5, Or a chevron checky between three martlets; 6, Or a bend sable between a stag’s head and a hunting horn.


The crests on either side of the helmet are: (1) A lion’s head erased; and (2) A demi-wild man affronty wreathed about the loins bearing a club in his dexter hand over his shoulder.

The mottos beneath the supporters are: (1) Spero meliora; and (2) I mean well.

The supporters are: (Dexter) A lion rampant gardant; and (Sinister) A wild man wreathed about the loins.

Below the shield can be seen hanging from a ribbon the badge of a baronet of Nova Scotia, encircled with the motto of that order: Honestæ gloria fax mentis.

Doing some research in the Lyon Ordinary and Papworth's Ordinary of British Armorials, I found the following identifications in each of the quarters (in order):

1. We have seen these arms before, at Glasgow Cathedral, about which I posted on September 19, 2016, at https://blog.appletonstudios.com/2016/09/public-memorials-to-old-glasgow-family.html  They are the arms of Stewart of Blackhall, Or a fess checky azure and or overall a lion rampant gules.

2. The first and second quarters may be Craufurd of Craufurdland: Gules a fess ermine. (Seen in our posts about Crafurdland Castle, https://blog.appletonstudios.com/2017/08/the-heraldry-of-fine-old-scottish-home.html and https://blog.appletonstudios.com/2017/08/heraldry-in-craufurdland-castle.html) The second and third quarters are Barclay of Pearston, Azure a chevron between three crosses paty or.

6. Porterfield of that Ilk. Or a bend between a stag’s head erased and a hunting horn sable garnished gules.

The other, less ornate, coat of arms seen on the house, was this one: 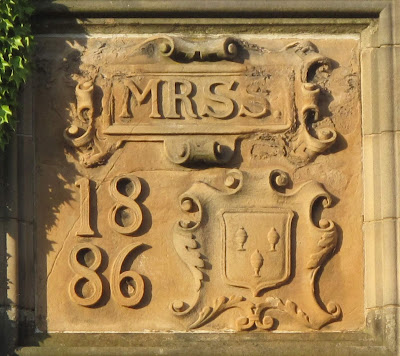 Of the other inscriptions on the plaque, we see: MRSS. and 1886.

MRSS. is the initials of Sir Michael Robert Shaw-Stewart, 7th Baronet ((1826-1903). And I'm guessing that 1886 is the date of the erection of the house, as I didn't see any other significant dates (births, marriages, etc.) in the history of the family given in Burke that matched this year.

Still and all, what a great couple of pieces of heraldic serendipity on which to end three days of touring heraldic Scotland!