Brass Heraldic Memorials to Two Members of a Family


Continuing our way around the interior of St. Michael's Church in Linlithgow, we came across two brass heraldic plaques in memory of different members of a family. 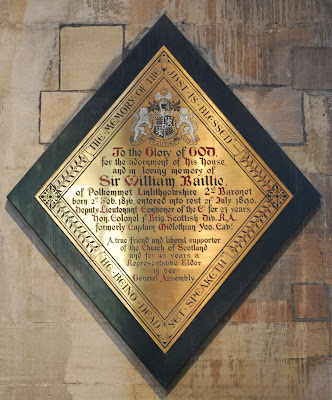 The first reads as follows:


To the Glory of God
for the adornment of his house
and in loving memory of
Sir William Baillie,
of Polkemmet, Linlithgowshire 2nd Baronet
born 2nd Feb. 1816, entered into rest 21st July 1890.
Deputy Lieutenant Convener of the Co. for 27 years
Hon. Colonel 1st Brig. Scottish Div. R.A.
formerly Captain Midlothian Yeo. Cavy.
A true friend and liberal supporter
of the Church of Scotland
and for 45 years a
Representative Elder
in her
General Assembly. 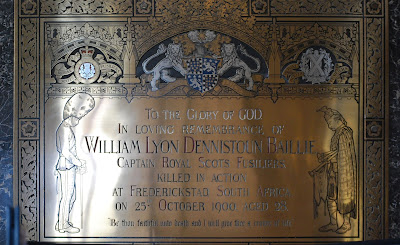 
To the Glory of GOD
In loving remembrance of
William Lyon Dennistoun Baillie
Captain Royal Scots Fusiliers
killed in action
at Frederickstad, South Africa
on 25th October 1900 aged 28.
"Be thou faithful unto death and I will give thee a crown of life."

Both plaques bear a coat of arms, though on the plaque for Sir William Baillie the arms are done in black and white. 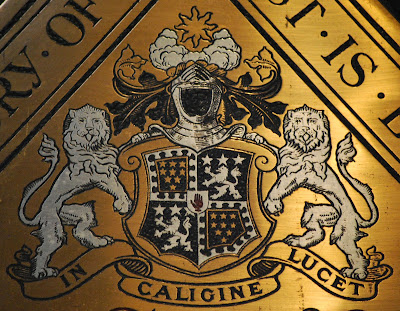 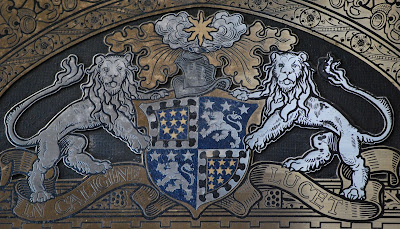 In the Lyon Ordinary the arms of Baillie of Polkemmet are blazoned as: Quarterly: 1 and 4, Azure nine mullets three three two and one or within a bordure counter-nebuly argent and sable; 2 and 3, Azure a lion rampant in chief three mullets argent (for Inglis of Murdiston). The first matriculation of these arms was made in 1672-7; the second in 1794; and the third in 1810.

The crest is A star [which I take to be an estoile, which has wavy rays] of eight points issuing out of a cloud proper, with the motto In caligine lucet (It shines in the dark), and with supporters Two lions guardant argent.

Sir William Baillie also bears the badge of a Baronet of Great Britain (Argent a sinister hand couped gules) in the center of his shield.

What a beautifully done set of brass armorial plaques to two members of the Baillie family.