One of the things that I really enjoy about visiting churches in Great Britain is the sheer number of heraldic memorials, their sometimes widely varying ages, and the many forms that they take.

Continuing our heraldic tour of St. Michael's Church in Linlithgow, Scotland, we came across this memorial: 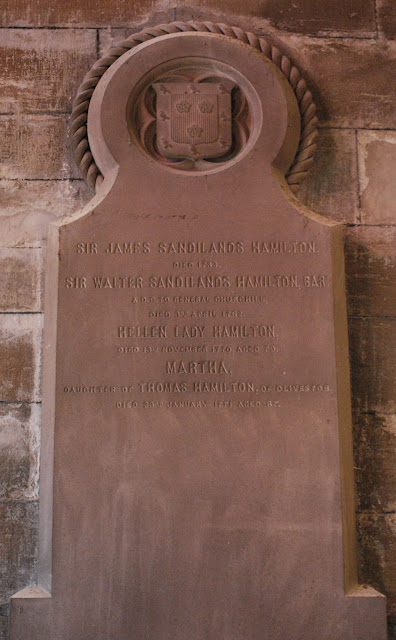 The form is not a common one; indeed, I don't remember seeing others just like this in our travels over the years. (I must say, though, that I really admire the carving of the rope around the circular top of this monument!)

The inscriptions on the main body of the monument read:

It is, of course, the arms carved at the top which got my attention. 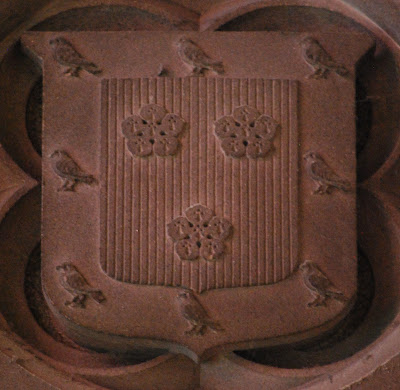 The arms of Hamilton of Westport are blazoned in An Ordinary of Arms by Sir James Balfour Paul as Gules three cinquefoils ermine within a bordure argent enaluron of eight martlets gules.

For those to whom the term enaluron is unfamiliar, Parker's A Glossary of Terms Used in Heraldry says: "Bordure enaluron: a name given to one charged with eight birds of any kind, and it may be blazoned an enaluron of (say) eagles, which would imply that it was a border, and that it was charged with eight eagles. The word is probably only a corruption of the French en orle."

The arms here are, of course, a suitably differenced version of the well-known arms of Hamilton, Gules three cinquefoils ermine.

Sir Walter Sandilands Hamilton, a captain in the army who served thirteen campaigns under Marlborough, married his cousin Helen, daughter of Thomas Hamilton, of Olivestob, the "Helen Lady Hamilton" on this monument. Martha Hamilton, the last entry, would have been her sister.

They had two sons, James and Thomas, both military officers who died without issue, and daughters.

What an interestingly complex family history, all wrapped up into a single monument to members of this family in a church in Linlithgow.