Another Saint, and the Arms of an Earl


In the third panel of the stained glass window at St. Michael's Church in Linlithgow, Scotland that I've been sharing with you, above the lower portion of King David I and his attributed arms, is the figure of St. Bridget.

Above her head is a knight on horseback, bearing a banner with fleurs-de-lis and whose pauldron (shoulder armor) marks him as a Crusader (Argent a cross gules). But especially, he carries a shield with the well-known arms of Douglas: Argent a heart gules on a chief azure three mullets argent. 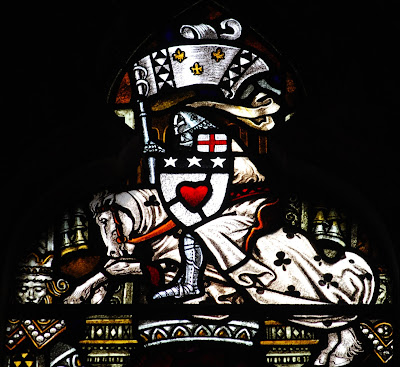 I suspect that this is meant to be "Good Sir James" Douglas, who was slain in August 1330 fighting under King Alfonso XI of Castile against the Muslims of the Kingdom of Granada, carrying the heart of Robert Bruce as a token of Bruce's unfulfilled ambition to go on crusade.

According to John Barbour's description of Douglas' last battle, when the enemy broke, Sir James and his companions followed hard behind. Having outstripped most of his men in the pursuit, Douglas suddenly found himself far out in front with only a few of his followers around him. As he rode back to rejoin the main body, he saw Sir William St. Clair of Rosslyn surrounded by a body of Moors who, seizing their opportunity, had quickly rallied and counterattacked. With the few knights who were with him, Douglas turned aside to attempt a rescue but, outnumbered twenty to one, the group was overrun. It has become a popular legend that Douglas then took from his neck the silver casket which contained the heart of Bruce and threw it before him among the enemy, saying, "Now pass thou onward as thou wert wont, and Douglas will follow thee or die." (Alas, this story seems to be a 16th-century addition to Barbour's poem.)

By 1333 Bruce's heart was incorporated in the arms of Sir James' son, William, Lord of Douglas, and it has been a prominent part, sometimes with a golden crown, of the family's arms ever since.