If you are going to have a specially-commissioned (heraldic) gift made for someone, you will probably want to go "all out," wouldn't you?

In this particular instance, the Craufurds of Craufurdland certainly did, and we were lucky enough to be able to see them still in Craufudland Castle.

The first was this very impressive armorial tapestry: 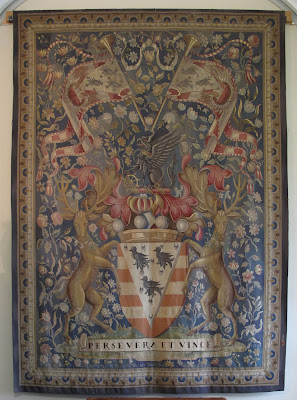 You'll want to click on the picture to get to the larger image. This smaller picture doesn't really do it justice.

It was, as the legend woven into the fabric near the base states: "Presented to the First Lord and Lady Kemsley by Sir William and Lady Crawford 1938."

Burke's Peerage (I have the 1938 edition) tells us that Sir James Gomer Berry of Farnham Royal, co. Buckingham, was created a baronet on January 25, 1938, and elevated to the peerage as Baron Kemsley on February 3, 1936. (A little further research shows that James Gomer Berry was created Viscount Kemsley in 1945. He was succeeded as Viscount, Baron, and baronet, by his son, Geoffrey Lionel Berry, on his death in 1968.)

His arms are blazoned as: Gules three bars or on a pile ermine three martlets sable. The crest is A griffin sejant sable collared and chained the chain reflexed over the back and resting the dexter claw on a Catherine wheel or. The supporters are On either side a stag guardant or gorged with a chaplet of mistletoe proper. The motto is Persevera et vince (Persevere and conquer).

What do the Berrys, Baron Kemsley, have to do with the Craufurds? The website for Craufurdland Castle gives us a hint, though, when it tells us that: "(John) Peter Houison Craufurd of Craufurdland and Braehead, ... the 28th laird, ... married Caroline Helen Berry, daughter of Lionel Berry, Viscount Kemsley" (the same Geoffrey Lionel Berry noted above).

Two other heraldic items related to the Berrys hang in the same hall as the tapestry: 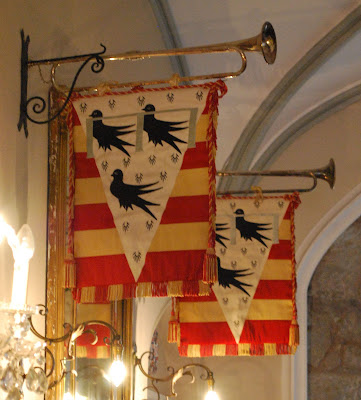 These trumpet banners bear the arms of Berry, but with a silver label, so presumably they are for Geoffrey Lionel Berry during his father's lifetime. (Note also that there are two trumpets with banners of the arms, without the label but including the badge of a baronet, above the crest on the tapestry.)

I note also that the parts of the mounting brackets which are screwed into the wall have the form of the heraldic millrind.

But what a great way to display these banners! I'm not sure that I would have thought to leave them hanging on their trumpets when putting them on display, but if I ever end up with a trumpet banner, this is how it's going to be displayed in my little "castle."