A Little Heraldic Something to Hang on the Wall


As the owner of a very nice heraldic tapestry myself (a tapestry version of a portion of the Nine Worthies and Nine Female Worthies taken from an early 15th century fresco at Castello della Manta castle in Italy. We purchased the tapestry while we were in Bruges/Brugge, Belgium, while attending the XXVI International Congress of Genealogical and Heraldic Sciences back in 2004. It's been hanging in our living room ever since), this custom-made tapestry in the Burrell Collection caught my eye. 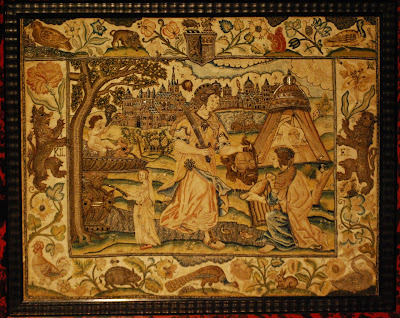 The central panel depicts Old Testament story of the pious widow Judith and the Assyrian general Holofernes. Here, she is placing his decapitated head into a sack held by her maid.

The border depicts and number of different animals surrounded by a floriated scrollwork, from a rabbit to lions to a squirrel to a chicken to a wolf to other birds.

The accompanying informational poster tells us that the tapestry was made for Luke Lloyd (1608-95) and his wife, Katherine Whitney (1610-1701). Most of panels like this one were intended for large, wealthy houses, but this one belonged to Lloyd, a Puritan who served as a Captain in the Parliamentary forces during the [English] Civil War, and was Sheriff of Flintshire in 1648. He lived with his family in a timber and brick farmhouse known as the Bryn. His wife was from a Royalist family living in Acton, Cheshire.

Once again, though, what really caught my eye was the impaled coat of arms at the top center of the work. 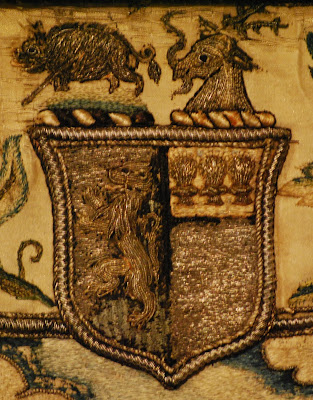 In the Dictionary of British Arms, Vol. 3, I did find the following for the Whitney arms:

Richard Weteley/Whetely: Argent on a chief gules three garbs argent. (Though much of the silk thread has rotted away over the centuries, there does seem to be a little bit of red color remaining around the edges of the garbs.)

I did not find this Lloyd crest in Fairbairn’s Crests. (The majority of Lloyd crests were Demi-lions erect.) The closest to this crest (which appears to be atop a mount a boar statant pierced by a spear bendwise sinister), but none of which is an exact match, is attributed to Bacon.

Fairbairn’s Crests assigns the crest over the Whitney arms, A stag’s head holding in the mouth a serpent, to “Borthwick, Cart, Caw, *Finlayson, Tipper, Wigton.”

So the arms and crests are still a bit of a mystery, insofar as a confirmed identification goes, but still, what a wonderful piece of work, and how well it has survived over the last several centuries!