The Craufurds of Craufurdland may live in a very old, historical* castle, but while it is historical, it is also their home, as you can see as soon as you walk in the front door ... 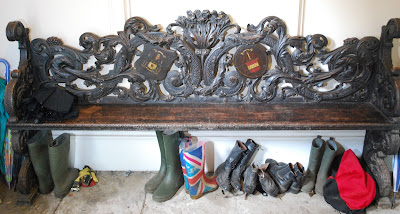 ... where you are greeted by this fine old carved oak armorial bench, with the "Wellies" and outdoor shoes of the family lined up beneath it, a perfect juxtaposition of historical home and modern use.

The are two painted coats of arms, with crests and mottos, on the back of the bench.

The arms on the right are, of course, those of Craufurd, which we discussed in more detail in the last post: Gules a fess ermine. 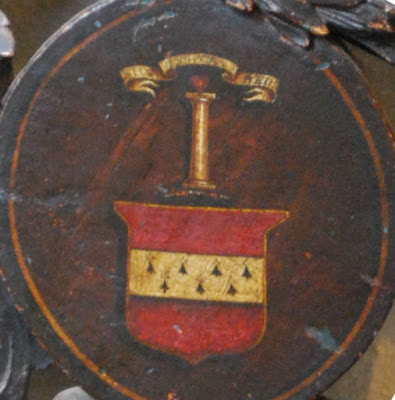 The coat of arms on the left is the arms of Howison: 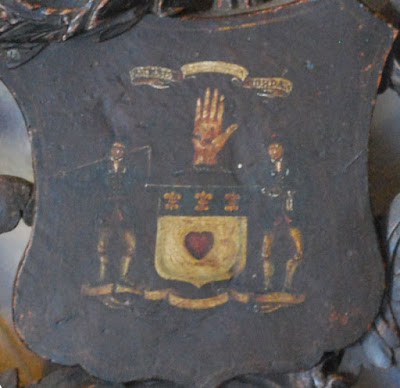 Of the Howison arms, Burke says: Howison (Braehead, co,. Midlothian; now [this is the 1884 edition of Burke] represented by Howison Craufurd, of Craufurdland, co. Ayr, and of Braehead, co. Midlothian). Ar[gent] a man's heart gu[les] on a chief az[ure] three fleurs-de-lis or. Crest - A dexter hand couped apaumée [proper]. Motto - Sursum corda. Once again, we turn to Fairbairn's Crests for the translation: Hearts upward.

Next time, we'll look at some more examples of the Howison arms in the castle, and later see how the Craufurd and Howison arms are combined there.