A "Final" Heraldic Work from the Burrell Collection, Glasgow


To "end" our tour of some of the heraldic holdings of the Burrell Collection (yes, I know it's taken a long time to get through this, but they have a lot of stuff there!), I thought I'd finish up with a "final" heraldic work. 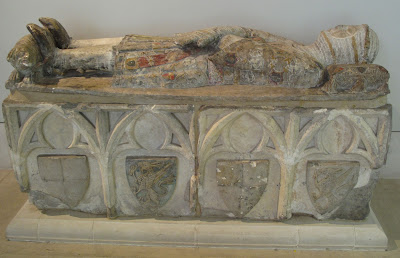 This is a painted limestone tomb from the monastery of Santa Maria de Obarra, at Calvera (near Huesca), in northern Spain.

The sign accompanying this work tells us, in addition to the information just above, that:

The effigy is said to represent Don Ramon Peralta de Espés (d.1348), Captain General of the Armies of Aragon and Grand Admiral of Aragon and Sicily.


A lot of the paint has disappeared from the stone over the centuries, but if you click on the image above to see a bigger version, you will find that a fair bit of paint is still left, especially his belt, some of the small shields on his surcoat, and on the second shield from the left on the side of the tomb (Azure a griffin segreant or).

The shields on the side of the tomb repeat, being (left to right) a quarterly coat (assuming that the colors on the small shields on his surcoat are correct, Quarterly or and gules), the griffin, the quarterly coat, and another griffin.

And so we "end" our heraldic tour of the Burrell Collection with this very nice 14th century funereal piece of heraldry, and say "final goodbye" both to Don Ramon here and the gallery which houses Mr. Burrell's extensive collection!