Provand’s Lordship is the oldest house in Glasgow. It is believed to have been built near Glasgow Cathedral in 1471. By the 1600s, it had become a private home. From the 18th through the early 20th centuries, it was used as an inn and housed a wide range of shops on the ground floor, with rented rooms above. In 1906 these shops included: a barber, a grocer, and a confectioner. A small extension to the building housed the City’s hangman for many years.

There are several old armorial stained glass panels in the Provand’s Lordship. Five of them were made in the 17th Century by Bohemian glazier Bernard Dinninckhoff, who worked in York from the late 1500s into the middle 1600s.

These window panels commemorate the marriages of the Beaumont family from Whitley Beaumont in Yorkshire, and were probably made for Sir Richard Beaumont’s hall at Kirkheaton, built in the early 1600s (and thus are contemporaneous with Provand's Lordship). Sir Richard Beaumont of Whitley, the son of Edward Beaumont and Elizabeth Ramsden, was was knighted by James I of England in 1609, and created a baronet on August 15, 1628. Beaumont died unmarried and with his death the baronetcy became extinct.

Among these armorial stained glass panels we find the following:

Beaumont of Whitley, York: The paternal arms are Gules a lion rampant argent langued and armed azure within an orle of crescents argent. Crest: A bull’s head erased quarterly argent and gules [here, orbed and armed or]. Neither Burke’s General Armory nor his Landed Gentry gives the quarterings shown here, only the arms of the name. However, in the panel here (and below) the second quarter is Harrington: Sable a fret argent.

Another panel gives the same Beaumont arms marshaled with those of Ramsden: 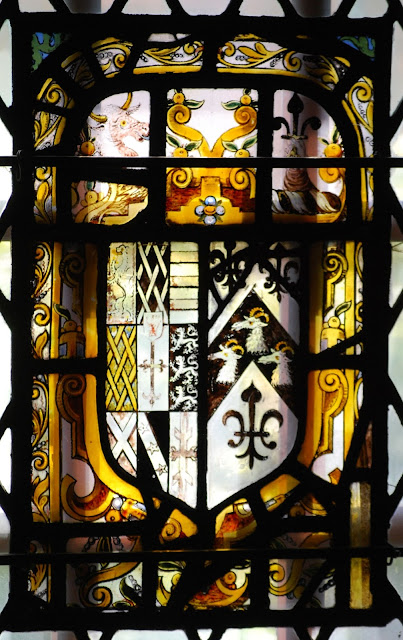 Ramsden: Argent on a chevron between three fleurs-de-lis sable three ram’s heads couped at the neck argent [here, armed or]. Crest: An arm in armor couped at the elbow proper holding in the gauntlet a fleur-de-lis sable. The panel here shows both the Beaumont and Ramsden crests.

And finally, there is a panel (much repaired over the years, it appears) with just the Ramsden arms: 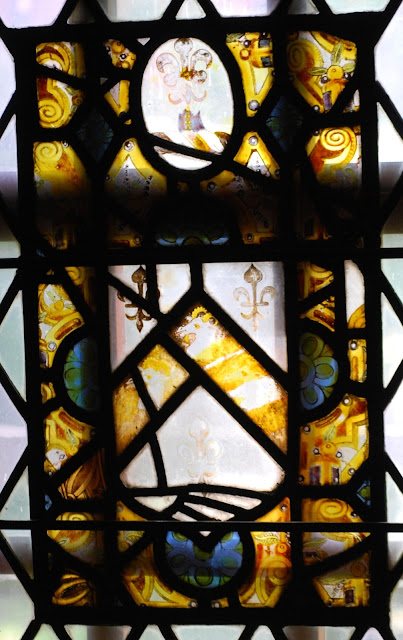 It is rare to find stained glass panels nearly 400 years old still extant. How wonderful is it that Glasgow has been able to collect and preserve these armorial works of art!