A New Coat of Arms at Yale University 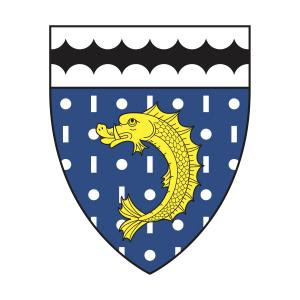 The arms are blazoned: Azure semy of plates and billets argent a dolphin embowed or on a chief argent a fess engrailed sable.

Various elements of the arms refer to Rear Admiral Hopper's work in computers (billets and plates looking very much like ones and zeroes), and the dolphin, of course, to her service in the Navy. The blue color of the shield links both to Yale University and to the U.S. Navy. The fess engrailed on the chief is evocative both of waves on the sea and of the Calhoun (the original name of the College) coat of arms, which contain a saltire engrailed.

Three Yale alumni worked to create the coat of arms: John Gambell, University Printer, the person responsible for Yale's visual identity, led the project; Stephen Scher, an art historian with "an extensive knowledge of heraldry"; and Jonathan Corum produced the final artwork. (I do think that the arms are far better than we usually see designed for American educational institutions.)