Continuing our tour through Provand's Lordship, the oldest house in Glasgow, we came across the following carved spruce panel with the Royal coat of arms as used in Scotland. 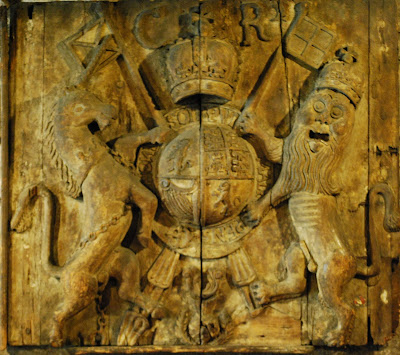 The sign with it states: "This finely carved coat of arms represents King Charles II (1630-1685), and is probably from a parish church." The panel itself dates from 1660-1685 (the years of Charles II's reign), and was donated to the Provand's Lordship Society in 1923.

Frankly, I love the somewhat startled expression on the lion supporter's face with its very round eyes. It reminds me very much of of the tee shirt I bought at King's Chapel in Boston (where my tenth-great grandparents, John and Mary (Chilton) Winslow, are buried). The lion supporter to those arms (the Royal Arms as borne by the Hanoverian Kings of Great Britain) also has very round eyes which, with the eyebrows, give it a similarly-startled expression. 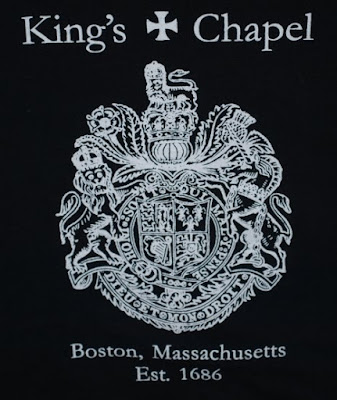 It is always interesting to me to see how different artists have created sometimes wildly different depictions of a coat of arms. And this one of the Royal Arms from Provand's Lordship is a great example of just that. The detailing and three-dimensionality of this carved wooden piece make a wonderful study.

(Nota bene: Delicacy prevents me from discussing, or even bringing to your attention, the somewhat large and detailed pizzles* on both the unicorn and lion supporters.)