Royal and Ecclesiastical Heraldry in the University Chapel, Glasgow


Okay, I've been fiddling around long enough, and it's time to get back to more of the heraldry we saw in Glasgow, Scotland last August. (Yes, there's a whole lot more to go!)

In this particular case, we' re going to be looking at the heraldry in the rose window in the Memorial Chapel at the University of Glasgow. 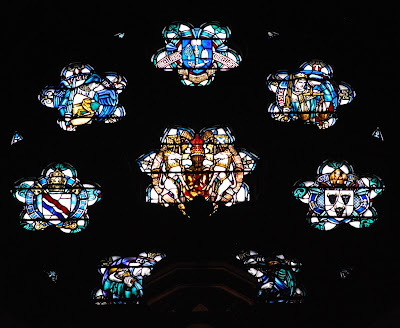 As you can see (and you should be able to click on the picture to see a larger version with more detail), it's an impressive window, with an equally impressive display of heraldry in it. The artist who created the window was Douglas Strachan (1875-1950), and the window was donated to the University by Sir Donald MacAlister (1854-1934), a former Chancellor of the institution.

The four coats of arms contained in the window all relate to the founding of the University. I will discuss the arms, and then show how they all relate to that founding.

At the top center, we have the arms of the University itself. (We have talked about these arms before, in the post on February 16, 2017, found at http://blog.appletonstudios.com/2017/02/some-university-heraldry.html)

In the center is the achievement of arms of the King of Scotland, James II (1430-1460), a shield of the "tressured lion" with its unicorn supporters bearing banners of the Royal Arms and the Scottish saltire, and the Royal crest atop the crown on the helm, and the Royal mottoes ("Nemo me impune lacessit", or as we might put it down here in Texas, "Don't mess with Scotland", and "In defens", an abbreviated form of "In my defence God me defend").

On the left is the arms of Pope Nicholas V (not to be confused with the Anti-Pope Nicholas V), Tomaso Parentucelli (1397-1455). As a quibble, I do not find the arms as emblazoned in the window here (Argent two bendlets wavy the upper gules and the lower azure) among the arms of the Popes. The arms that I have seen for Nicholas V everywhere else are blazoned as Gules two keys crossed in saltire argent. 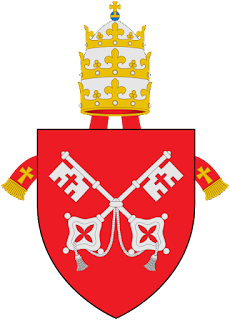 On the right, we have the arms of Bishop William Turnbull (ca.1400-1454), Bishop of Glasgow and first Chancellor of the University, Argent three bull's heads cabossed sable armed or. Bishop Turnbull was an ally and counselor to King James II, and served as his Keeper of the Privy Seal from ca.1440-1448.

(There is a fifth "coat of arms" on the upper left portion of the window, borne by the armored figure of "Fortitude," Argent a bend sinister vert overall a lion statant bendwise sinister or, but I have to assume that the arms, like the figure, are allegorical rather than depicting real heraldry.)

For how all of these various individuals (and their arms) are connected to the University, and more especially to its founding, we take this short excerpt from the webpage "The University of Glasgow Story" (http://www.universitystory.gla.ac.uk/biography/?id=WH0002&type=P) for enlightenment:

Prompted by Turnbull, James II wrote to Pope Nicholas V to request the establishment of a university in Glasgow. The Pope responded with a Papal Bull, a letter or proclamation named for the leaden seal (or bull) which was attached to it. Issued on 7 January 1451, the Bull erected a new studium generale for the teaching of "theology, canon and civil law, as well as the arts and any other lawful faculty". He granted the new University's doctors, masters, readers and students all the privileges, honours and immunities enjoyed by their counterparts at the University of Bologna. Turnbull became the University's first Chancellor.