Having a really great space in our living room above the large television which is just crying out for a piece of art to be hung there, we finally bit the bullet and actually went out to an arts and antiques show to see if there might be something that we both liked that would make a nice addition to our home.

And though we did see a couple of paintings that came close (including one that we both really liked, but decided that the subject matter - a skeleton - was not really what we wanted for in our living room), we decided to stop at an antique mall nearby which we visit periodically, just to see what they might have.

No paintings, at least none that appealed to either of us, but, of course, there were the not-entirely-unexpected sightings of "heraldry" in the form of made-up coats of arms. 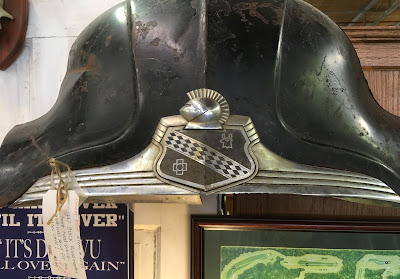 This first one is from the front end of a 1947 Buick Roadmaster automobile. The tag notes that it is "great decor for a man cave!" And it was on sale for on $199.00 (marked down from $249.00). I have to admit, it was just a little tempting, but frankly, I have no idea where I'd put it in my home. So it's still there at the antique mall, until someone else who has a good place for it spots it and takes it home. 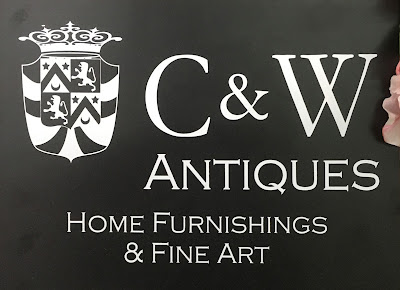 The other was a sign for the owners of one of the booths in the mall, with an unusual armorial logo on it. Checking out their website, I found a color version: 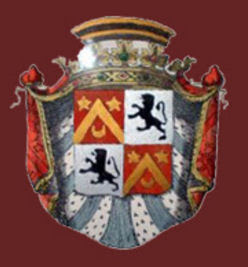 I'd originally suspected that the elements surrounding the sides and base of the shield were meant for mantling, but I can see from the color version that it's a stylized mantle.

The color version also leads me to think that the arms (Quarterly: 1 and 4, Gules a chevron between two mullets and a crescent or; 2 and 3, Argent a lion rampant sable) might actually be someone's coat of arms, possibly French or from the Low Countries. (Whether the arms legitimately belong either "C" or "W" remains an open question.)

Still and all, it was fun to run across some examples of heraldry while looking for something entirely different. Not a bad way to spend a day.