Three Boar's Heads on a Coat of Arms. Again It Is Asked: "Why?"


Like the arms of Cleethorpes in the last post, in another article from the Grimsby Telegraph we have a discussion about the coat of arms of Grimsby, Argent a chevron between three boar's heads couped close sable armed or langued gules. 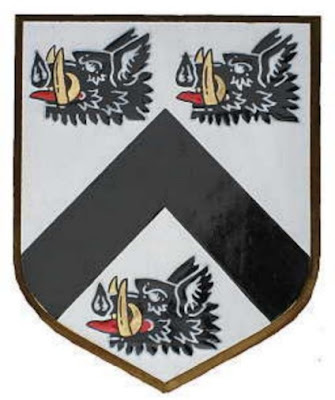 The arms were recorded in the heralds visitations of Lincolnshire in 1592 and 1694, which places them on a pretty solid footing. They were exemplified by the College of Arms in 1975.

The full article, with more information, photographs, and a short video showing other depictions of the Grimsby arms, can be found on the website of the Grimsby Telegraph at http://www.grimsbytelegraph.co.uk/why-does-grimsby-borough-s-coat-of-arms-depict-three-boars-heads/story-30132837-detail/story.html

* A commenter to the newspaper supposes that "the boars represent the fact that many local dignitaries and politicians are like pigs with their noses in the trough." According to the article, however: "It is believed that the boars' heads allude to a right of the Mayor and Alderman to hunt boar in Bradley Woods." However, it also notes that, "Several families connected with Grimsby had similar charges on their arms." This last, I expect - based on how many other civic arms in England incorporate charges from prominent local families - may be closer to the truth.