The day after the International Congress of Genealogical and Heraldic Sciences in Glasgow ended the last of the lecture series, there was a day-long tour of the City of Glasgow and environs. Not surprisingly, given the makeup of the participants, there was much heraldry to be seen.

They started us off at the University of Glasgow, whose arms could be found both carved into the portico of one of the buildings .... 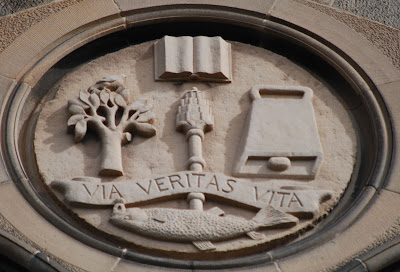 and also applied to the side of one of the University's vans parked nearby.

According to the University's website about it's coat of arms (http://www.universitystory.gla.ac.uk/coat-of-arms/), its motto, Via veritas vita, means "The way, the truth, the life."