Another (Different) Version of a Founder's Arms


In our last post we looked at, among others, the arms of Bishop William Turnbull as emblazoned in a stained glass window in Glasgow University's Memorial Chapel.

Those arms we blazoned as Argent three bull's heads cabossed sable armed or.

Well, on the exterior of a nearby building at the University, there is another, different, depiction of Bishop Turnbull's arms. 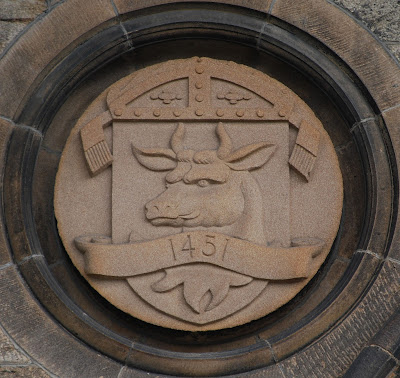 As you can see, this depiction of his arms are different, in that rather than having three bull's heads cabossed, here we have a bull's head erased. The depiction is not hatched, and so the tinctures are impossible to determine here. The shield is ensigned with a bishop's mitre, and the scroll with the date "1451" conforms to the date of the founding of the University.

The short answer is, I don't know, but either version is a nice cant on the surname, and a fine tribute to the man who worked so hard to establish this University.