Three Owls on a Coat of Arms. The Question Is Asked, "Why?"


It's always interesting to run across an article (whether on the internet or in a newspaper or magazine) that discusses a coat of arms, and the background of and reasons for the particular charges.

In this case, the article was entitled "Why are there three owls on the Cleethropes Town coat of arms?"* 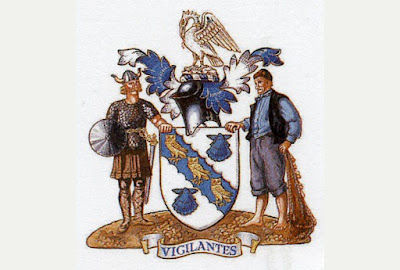 There is, of course, a lot more discussed about the arms than just the owls. Indeed, there's a 19th Century photograph of Levi Stephenson, who is thought to be the model for the sinister supporter of the arms. Check out the photograph in the article and you can certainly see the resemblance!

Things got switched up, heraldically as well as otherwise, when the Cleethorpes District Council was created in 1974. And you get to see how the local football (soccer, for my American compatriots) club uses a modified version of the old arms as their logo.

All in all, it's an interesting article that gives a lot more background and explanation than we can often find for the reasons behind an heraldic design. You can read the full article, with additional pictures and even a short video of other depictions of the arms and the owls, on the website of the Grimsby Telegraph at http://www.grimsbytelegraph.co.uk/why-are-there-three-owls-on-the-cleethorpes-town-coat-of-arms/story-30150296-detail/story.html

* The answer: Not, as one commenter opined, because owls, like the public, are kept in the dark. In fact, "The owls are thought to represent the three villages of Oole, Itterby and Thrunscoe, which make up the Thorpes of Clee."