An Impressive Brass Memorial With Lots of Heraldry


For this final armorial memorial brass in Glasgow Cathedral, we have this one which has what I think would have to be termed an "exuberant display of heraldry." (And not just the heraldry, but the trees from which the shields are hung, with leaves and flowers in abundance.)

It is a memorial to John Hamilton Gray, Clerk of Carntyne and Deputy Lieutenant of the County of Lanark, who died April 22, 1867, at the age of 66, and his wife, Elizabeth Caroline Johnstone, who died February 20, 1887, at the age of 86.

The upper part of the memorial contains two armorial panels: 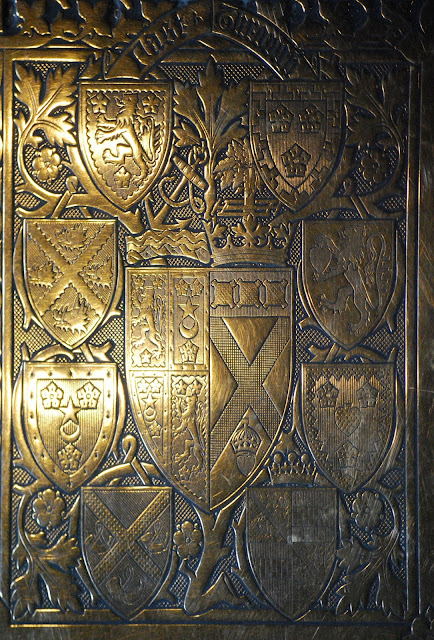 The first (above), from the dexter (left) side of the memorial, is for John Hamilton Gray of Carntyne, showing his arms impaled with his wife's in the center, and surrounded by eight shields of what I assume are the arms of his great-grandparents. On his arms and on the third shield down on the dexter (left side) are the differenced arms of Hamilton. The second crest above his shield is also the well-known crest of Hamilton (an oak tree being cut through the trunk by a frame saw).

The arms of Gray of Carntyne were granted in 1819 and are blazoned: Gules a lion rampant between three cinquefoils all within a bordure engrailed argent.

(Well, the blazon in Balfour Paul's An Ordinary of Arms says "... three cinquefoils argent all within a bordure engrailed of the last," but the rule I try to follow is: "In blazoning a Coat of Arms in which two or more Charges of the same Tincture immediately follow each other in the Blazon, it is not necessary to mention the tincture until all the Charges of such Tincture have been specified." John E. Cussans, Handbook of Heraldry, 1882, p. 161.)

John Hamilton Gray of Carntyne (1800-1867) was born in Glasgow, the son of Robert Gray of Carntyne, merchant, and educated at (but did not graduate from) the University of Glasgow.  He graduated BA from Oxford in 1844. He became an advocate in 1825 and then vicar of Bolsover and Scarcliffe in Derbyshire in 1836. He was a noted antiquary.

There is a portrait of him when he was a boy by Sir Henry Raeburn, a photograph of which can be found on-line at http://www.theglasgowstory.com/image/?inum=TGSA03587 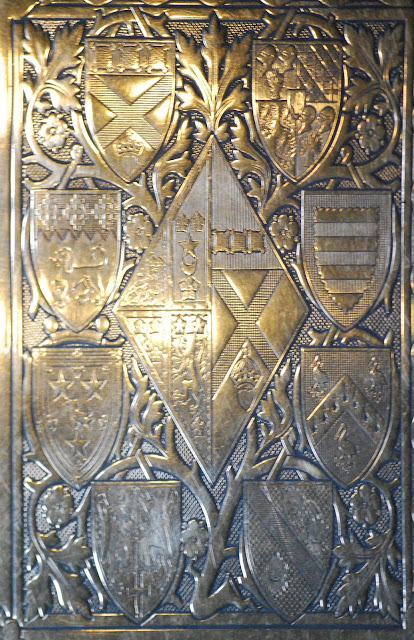 The second panel (above), from the sinister (right) side of the memorial, is for Elizabeth Caroline Johnstone, and has her arms impaling her husband's in the center.

She was an antiquarian and scholar in her own right, having translated Karl Ottfried Müller's book The History of Etruria, with an account of the manners and customs, arts, and literature of the Etruscans into English which was published in 1868 and, as the memorial notes, was the author of "'Sepulchres of Etruria' and other works".

The husband's (without the quartering) and wife's arms also appear at the top (impaled) and bottom (side by side) of a window in the Cathedral, in brilliant colors. 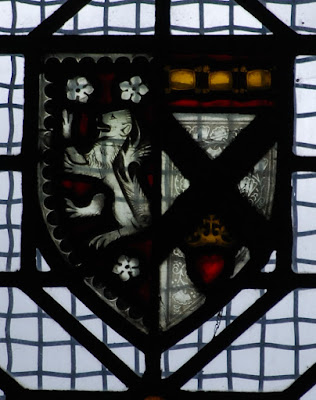 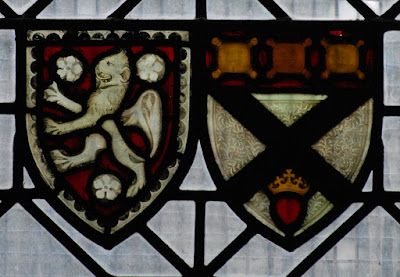 The legend at the base of the window notes: "This window replaces an earlier window to the memory of John Hamilton Gray of Carntyne and Caroline his wife, 1869, and incorporates the coat of arms from that window."

All in all, some wonderful memorials to this husband and wife, chock full of heraldry, and a great segue from the armorial brasses to the armorial windows which can be found in Glasgow Cathedral.