There is a really nice pair of windows in the Glasgow Cathedral; not a matched set, exactly, but a complementary pair.

The two windows bear a single inscription across their bases:

"This window dedicated to the glory of God and the memory of  / & the gift of Sir Archibald Campbell of Succoth A.D. 1940
the original donor is the work of Herbert Hendrie. /  It replaces glass provided Sir Archibald Islay Campbell A.D. 1861."

The windows also bear two coats of arms: the dexter (left) bears the arms of Sir Archibald Islay Campbell (Quarterly: 1 and 4, Gyronny of eight engrailed or and sable [Campbell]; 2 and 3, Azure a lion rampant argent within a bordure counter-compony argent and azure [Wallace of Ellerslie]): 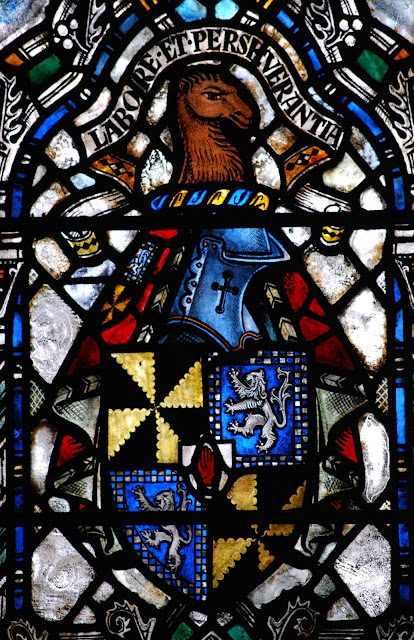 and the sinister (right) bears the arms of Sir Archibald Islay Campbell marshalling those of his wife, Lady Agnes Grosvenor, the daughter of the Marquess of Westminster (Quarterly: 1 and 4, Azure a portcullis with chains pendent on a chief or on a pallet azure between two Tudor roses proper a cross flory between five martlets or [the arms of the city of Westminster granted as an augmentation]; 2 and 3, Azure a garb or [Grosvenor]): 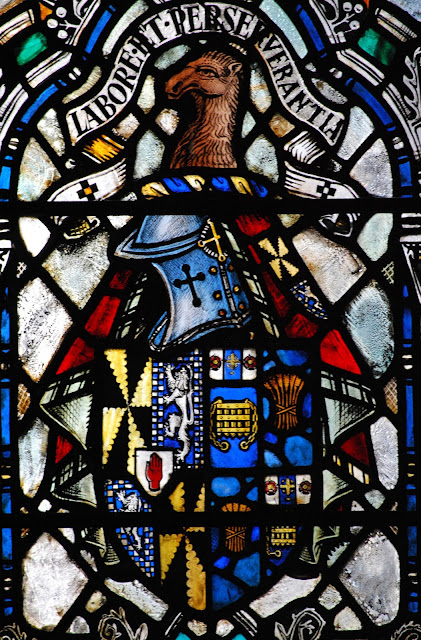 Note that the mantling on each of the helmets bears a depiction of the arms.

The motto is Labore et perseverantia (With labor and perseverence, according to Fairbairn's Crests).

I'm an enthusiast of the arms of Campbell of Succoth because they have as a crest A camel's head couped proper. I first ran across these arms when doing research for my book Camels In Heraldry. I am currently - far too slowly for my own liking, but there's only so much time in the day and many other projects crying out to be done - working on a second edition with even more examples of camels in heraldry.

What a beautifully done pair of armorial windows!