For this next armorial window in the Glasgow Cathedral, I had to do a bit of genealogical research.

Fortunately, the window also mentioned the name of his wife, and that helped to narrow down the identification of which particular "Ninian Hill of Lambhill" the window was dedicated to.

The full inscription on the window reads:


This window replaces and earlier window
presented in 1865 by Thomas Hill, Esq.
of Merrylee in memory of Ninian Hill
of Lambhill and Mary Craufurd of
Jordanhill, his spouse, and incorporates
the coat of arms from that window. 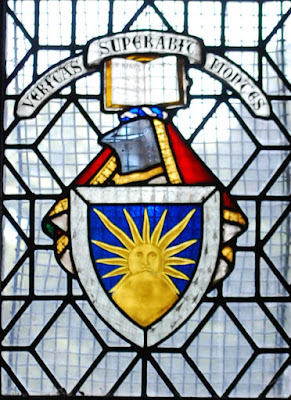 He and his wife Mary sold part of their property in Glasgow, specifically the lands of Ramshorn and Meadowflat, to the Burgh for “three Houss or Hospitalls” ("the Merchants, Trades, and Hutchesones Hospitalls") there in 1694.

The arms of Hill of Lambhill were matriculated in 1676 by Ninian Hill of Lambhill (the elder) and are blazoned Azure a hill or with the sun rising and appearing over the top thereof in his splendour [proper, or also or].

The arms as shown in the window are the arms of Hill of Merrylee, matriculated in 1865 (and so about the same time as the original window was donated), and so must be the arms of the donor of the window, Thomas Hill of Merrylee, whose arms are blazoned Azure a hill or with the sun rising and appearing over the top thereof in his splendour [proper, or also or] within a bordure ermine. The crest is The Bible expanded proper, and the motto is Veritas superabit montes (Truth shall cross mountains).