I have been frustratingly unable to find much information about the person who is memorialized in this next stained glass armorial window in the Glasgow Cathedral.

The text at the bottom of the window states that:


This window replaces the Munich
glass presented 1861 in memory of
James Tennant, Esq. of St. Rollox

I have, however, found nothing about this particular individual. I have found a fair bit about Charles Tennant of St. Rollox (1768-1838, and whose monument in the Glasgow Necropolis across the street from the Cathedral bears a statue of him sitting in a chair), and some about (one of) his son(s), John Tennant (1706-1878). James Tennant of St. Rollox, presumably a relative of Charles and John, however, remains elusive. (I think that the dates are not quite right for him to be the person to whom Robert Burns was writing in his "Epistle to James Tennant." That James, son of John Tennant, was the younger brother of Charles Tennant of St. Rollox noted earlier in this paragraph, and would have been roughly contemporary with him, making that James a little early for the 1861 date of the original window.)

I have also been unable to determine if Scottish actor David Tennant (Dr. Who, Hamlet, Richard II, Gracepoint, Broadchurch, and a whole lot of others) is a descendant or relative of James Tennant, Esq. of St. Rollox or Charles Tennant of St. Rollox or his son John Tennant.

(It turns out that he is not; a link forwarded to me by friend, and blog follower, Margaret Sainte Claire, notes that David Tennant is a stage name. He was born David McDonald.)

Be all that as it may, it's a nice coat of arms to be found in that window. 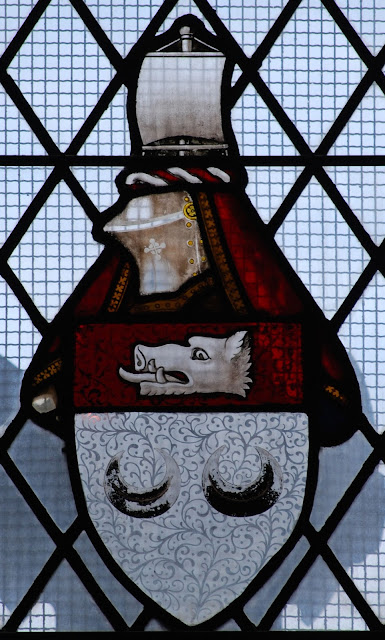 The blazon of the arms of Tennant of St. Rollox (matriculated 1856) is: Argent two crescents in fess sable on a chief gules a boar's head couped of the first. The crest is A sail proper. Though not appearing in the window, Fairbairn's Crests gives the motto as Dabit Deus vela (God will fill the sails).