Heraldic Windows of Another Campbell Husband and Wife


Continuing our tour of the heraldic stained glass in the Glasgow Cathedral, I ran across another married couple, in this case, Alexander Campbell of Hallyards and his wife, Barbara.

The first window (the one on the right as you are looking at them), bears the inscription:

"This window replaces an earlier window presented by the children of Alexander Campbell, Esq. of Hallyards in his memory and incorporates the coat of arms from that window." 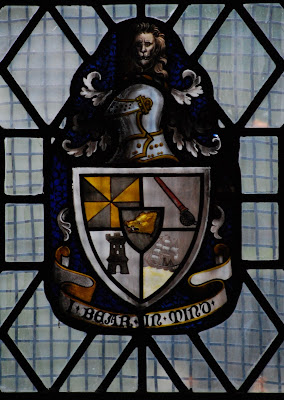 The second window (on the left as you are looking at them, bears a similar inscription:

"This window replaces an earlier window presented by the children of Mrs. Barbara Campbell in her memory and incorporates the coat of arms from that window." 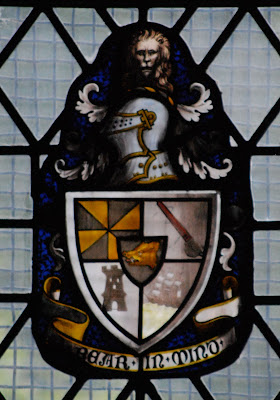 The blazon of the arms of Campbell of Hallyards given in Balfour Paul's An Ordinary of Arms is:

Quarterly: 1, Gyronny of eight or and sable; 2, Argent a broadsword in bend gules hilted sable; Argent a castle triple-towered sable; 4, Argent a ship in full sail proper in a sea undy vert; all within a bordure argent, and in the centre of the shield on an escutcheon Sable a boar's head erased or.

The arms were granted in 1814. The crest is A lion's head affronty proper and the motto: I bear in mind.

There is a portrait of him by Henry Raeburn. 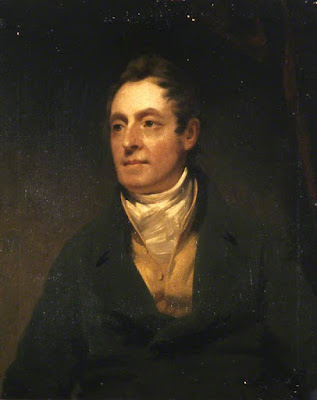 Alexander Campbell of Hallyards, the son of John and Mary Campbell, came from Doune, the cradle of the family, hence the nickname Sandy Doune. Born in 1768, he was a man of great energy; the head of a large family, a captain of the Highland Sharpshooters, an ardent supporter of the Celtic Society and his business acumen (he was a partner in the West Indies trading company "John Campbell Snr & Co") earned him the additional nickname of Business Sandy. He died in 1817.

His wife was Barbara Campbell, daughter of Archibald Campbell of Jura and his wife Sarah. Barbara was born about 1774 in Jura.