Old and New Versions of the Same Arms


It's always nice to find an organization which has a coat of arms to not only find them using it, but even "updating" it so as to not seem quite so "stuck in the past" as can sometimes happen when they don't realize that a coat of arms is not a trademark, and thus does not have but a single "correct" depiction.

In this case, as we walked about the streets of Glasgow, Scotland, we ran across the following depictions of the arms (indeed, in the first two instances, the complete achievement of arms, with crest and supporters) of the Bank of Scotland (whose arms were first granted in 1701). 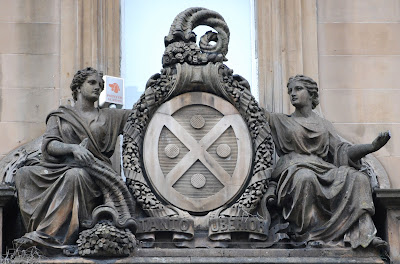 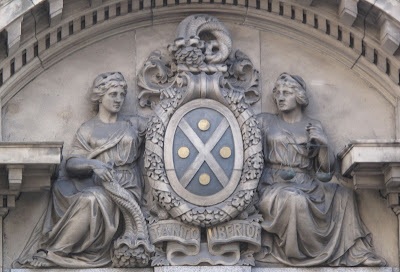 The very wide "bordure" around the shield in these depictions is actually not a part of the arms; apparently the stone carvers didn't differentiate between the edge of the shield and a bordure, which is a charge upon the shield.

The arms are blazoned: Azure a saltire argent between four bezants (or roundels or), a clear allusion both to Scotland (with the blue field and white saltire) and the business of banking (the term bezant comes from the old golden coin of Byzantium, and so signifies money, and by extension, banking). The crest is a cornucopia, a symbol of wealth and plenty. The supporters are Plenty (holding another cornucopia) (dexter) and Justice (sinister). The motto is Tanto uberior (So much the more plentiful, or The more to prosper).

And here is how they have "modernized" their arms (and turned it into their logo): 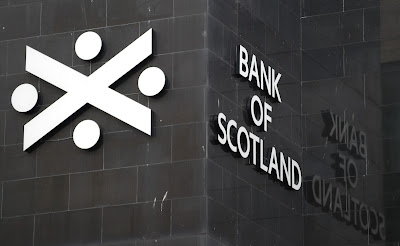 I know a lot of heraldry enthusiasts are somewhat less than enthusiastic about the use of logos, but I find that updating a coat of arms (thereby turning it into a logo) is a lot more satisfying than doing as a number of corporations have done, which is to simply jettison the "old" coat of arms and create an entirely new - and often too soon outdated - logo. The arms, on the other hand, can be modified in any number of ways which can modernize them in accordance with changing tastes, while retaining the connection to the past in a way that no newly-designed logo can.

I think the Bank of Scotland is to be commended for continuing to use their arms in the 21st Century.