A Final Heraldic Monument from the Glasgow Necropolis


This final heraldic monument in the Necropolis at Glasgow does not contain a coat of arms at all, but only a crest and motto.

The monument is dedicated to James MacKenzie, Esq. (died 1838 at age 77); his wife Louisa Balfour (died 1855); their son, James MacKenzie, Esq. (died 1873); the younger James' wife, Elizabeth Campbell (died 1903), and two of James and Elizabeth's daughters, Louisa (died 1937) and Margaret (whose particulars were hidden behind grass in my photographs of the monument).

The following information about the MacKenzie family was found on the Rootsweb portion of the Ancestry.com website:

James MacKenzie the Elder was a Lieutenant in the Second Battalion Scots Guards, and was also Lord Provost of Glasgow from 1806 to 1808.

They had nine children, the youngest of whom, James MacKenzie (who received the name of his father after it having been given to two elder brothers, each of whom died young), was born October 6, 1825, and died March 6, 1873, in Bonhill, Dunbarton, Scotland.


The book Exhibition Illustrative of Old Glasgow, published in 1894, adds the information that James MacKenzie (the elder) of Craigpark was a merchant, and was Bailie in 1801-1802 in addition to his later service as Provost of Glasgow.

(Okay, yes, I'm just showing off a little now. But I continue to find it amazing what you can find out about people from a brief search on the internet. In the space of five minutes or so, I've been able to flesh out some more details about this MacKenzie family and learn something about their lives while sitting at my computer in Texas, making them far more than the simple recitation of names and death dates on a monument photographed in a moment on a hillside in Scotland. How cool is that?)

Anyway, I digress. We're here because of our interest in heraldry. 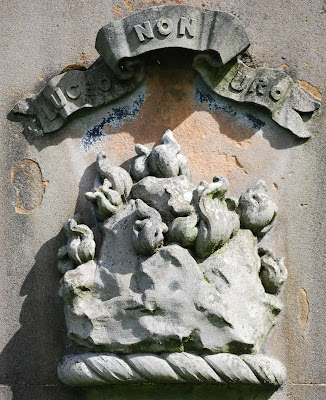 The monument has a deeply carved, three-dimensional crest and motto. The crest is blazoned in Fairbairn's as A mountain in flames proper, and the motto is given as Luceo, non uro (I shine, but not burn).

Given that this same crest and motto are used by MacKenzie, Earl of Seaforth, Chief of Kintail (according to Burke's General Armory), I would expect the arms (which do not appear on the monument) to be similar to (but presumably differenced from) the Earl's arms, which are: Azure a stag's head cabossed or.