Another Coat of Arms in the Glasgow Necropolis


The next armorial memorial I ran across while walking through the Necropolis in Glasgow, Scotland, was that of Alex (full name, Alexander) McDougall, 1798-1864. 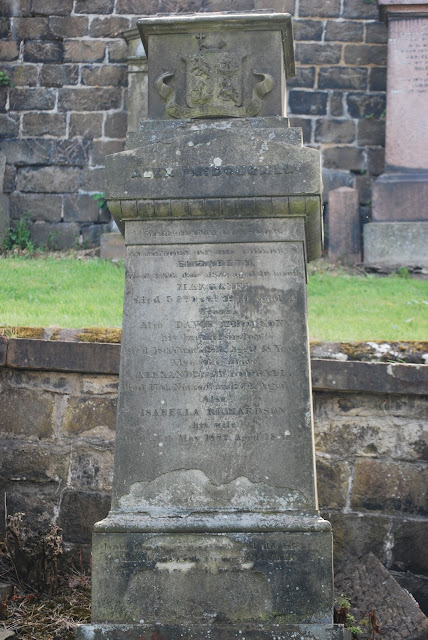 The monument also memorializes two of his children, Elizabeth and Margaret, both of whom died young; his wife Isabella Richardson, who survived him by some years; and a David Thompson (his brother-in-law, I believe, from what I can read of the inscription).

The coat of arms at the top of the monument is a quarterly coat, with crest above and, unusually for Scotland, motto below. (The usual Scottish practice is to place the motto above the crest rather than below the shield.) 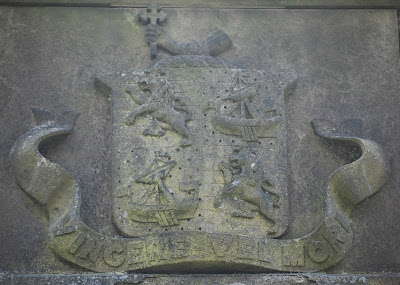 I did not find this coat of arms in Balfour Paul's An Ordinary of Arms, but from what I can make out of the various quarters on the monument, the first and fourth quarters are Barry [of six?] a lion rampant crowned (the first quarter is barry of six, while the fourth is carved as barry of seven), and the second and third quarters (assuming that the dots are hatching) are Or a lymphad sails furled oars in action. The crest is an arm embowed holding in the hand a cross crosslet fitchy. (I don't find this crest in Fairbairn's Crests.) The motto is Vincere vel mori (To conquer or die).

A search on-line found a number of Alexander McDougalls, but none whose birth and death dates (or residence in Glasgow) matched this one, and a perusal through the Scottish armorials I have did not find a match, either. (Some said for McDougall to see McDowell, and the arms for McDowell are Azure a lion rampant argent gorged with a crown or. But the field here is definitely Barry and the lions crowned rather than gorged.) So I don't know where else to look for this individual.

Still, it's a nice monument with a well-carved (except for the confusion about barry of six/seven) coat of arms on it.