A Coat of Arms in the Glasgow Necropolis


Just the other side of a street from the Glasgow, Scotland cathedral (St. Mungo's), on a low but prominent hill is the Glasgow Necropolis. Opened in April 1833, about 50,000 individuals have been buried there (most without monuments, of which there are only about 3,500).

While we didn't manage to walk through the entire cemetery (it's about 37 acres, and is laid out as an informal park, so the paths meander about quite a lot), we did find a few heraldic (and pseudo-heraldic) memorials while we were there.

One was this memorial to Edward Alexander (1791-1875), merchant and Burgess of the City of Glasgow. 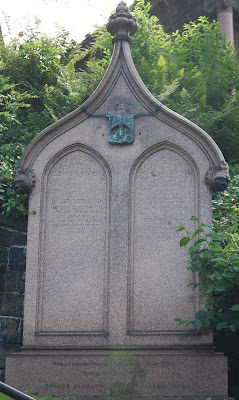 His arms, near the top of the monument, are incomplete; what remains is a copper base, hatched, with a chevron missing. 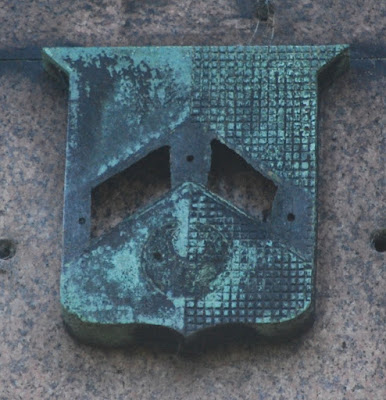 I didn't find Edward Alexander's arms in An Ordinary of Arms by Sir James Balfour Paul, but several Alexanders with similar arms appear in that volume. The closest one was entry number 4540 for "Alexander of Knockhill (1672-7):" Parted per pale arg[ent] and sa[ble]a chevron and in base a crescent, all counter-changed, a mullet for difference. If the mullet were to have been placed on the chevron, that could explain why no mullet appears on Edward Alexander's memorial here. (There are other possible explanations for it's lack here, too.)

Another entry, number 4578, is for "John Alexander, merchant, Glasgow (1861):" Parted per pale arg[ent] and sa[ble] a chevron counter-changed between a cross crosslet fitchée gu[les] and a galley, sail furled, in chief or, and in base a crescent counter-changed of the field.

Edward Alexander's arms show no trace of having any charges in chief (above the chevron), but the counterchanged crescent is plainly seen here, and the mention of Glasgow makes it of interest here.