Another Movie Clip of the College of Arms


It was probably a good thing that I watched the entire British Movietone newsreel from the 1930s about the College of Arms, because there was a (marginally) related link after the closing screen of another visit to the College of Arms, this time by one "Bond.  James Bond." in the 1969 movie On Her Majesty's Secret Service. 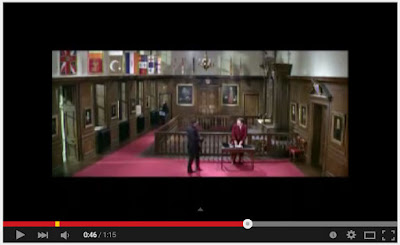 As you can see in the still above, Agent 007 visits the actual College of Arms in London, where he is shown here in the main reception room at the College, next to the Earl Marshal's Court (the area inside the railing).

There's a bit more (they were allowed to film in the College, though of course there is no herald named "Sable Basilisk"), which you can see in this short one and a quarter minute clip to be found on YouTube at https://www.youtube.com/watch?v=3Q8ch2ARXIg

The drawing of the arms shown in the clip are, in fact, those of Sir Thomas Bond, created a baronet by King Charles II, and whose arms are blazoned in Burke's General Armory as Argent on a chevron sable three bezants, and whose crest is On a mount vert a lion sejant argent.  The motto, Orbis non sufficit, gave rise to the title of the later Bond movie, The World Is Not Enough.