A Computer Program of Interest


I periodically see a request made on one heraldic newsgroup/bulletin board/Facebook page/etc. where someone is asking about whether there is any software anywhere that would allow a person to type in a blazon and the program would create a picture of the coat of arms.

There have been a (very) few programs that have done so in the past (Blazons! is one early one which comes to mind), but they all have been very limited in what they would allow you do with them, in some cases simply inserting a question mark when the program didn't understand the heraldic term or did not have a particular charge in its database, or simply giving an error message for that part of the blazon.  Indeed, I wrote about one such on-line program in my post of January 12, 2012 (http://blog.appletonstudios.com/2012/01/on-line-heraldry-drawing-program.html).

Be that as it may, there's a new downloadable program (the website calls it an App, but since it is written for Windows 8.1, I think it's really better termed a program, but what do I know?) out there that attempts to fill this niche, name "Heraldry." 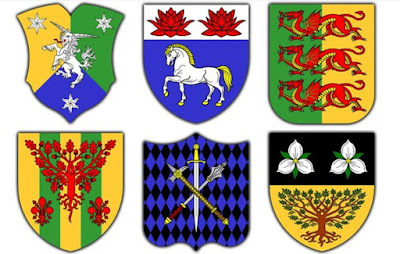 Created by Tomas Brattström and published by Miralon, the graphics (from the picture above, taken from the website where the application can be downloaded) appear to be pretty decent.

There is also an image with thumbnails of different screens which, if you click on the individual images, give you a larger picture with some of the different things that can be done with charges, including size, color, placement, and orientation.  So it does seem to be a bit more robust than similar programs in the past.

Alas, I do not have Windows 8.1 on any of the computers to which I have access, so I won't be downloading this program myself to see what it can really do (and where it may fall short).  However, if you have a machine running Windows 8.1 and are interested in a program like this, by all means click on over to the Microsoft Apps website and check it out for yourself.  "Heraldry" can be found on-line at http://apps.microsoft.com/windows/en-us/app/heraldry/f40cb453-d006-477b-a373-45c1892eca65