Movie Clip of the College of Arms


As some of you may have seen already - a couple of people have posted a link on Facebook, and the most recent College of Arms newsletter also included a link -- British Movietone has posted on YouTube a six-minute clip (I didn't see a date given, but it looks like sometime in the early 1930s) entitled "The First Film Ever Taken In . . . . . . . . 'The College Of Arms.'" 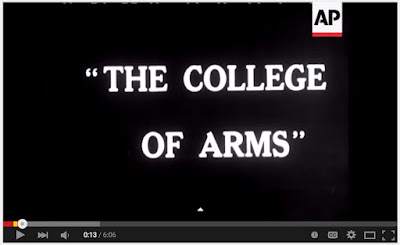 With a brief introduction by A.G.B. Russell, then Lancaster Herald, the film shows (alas! just in black and white) some of the holdings of the College of Arms.  Among the ones that I recognized were:

A long scroll showing the funeral procession of a noble.  [Update: This is more likely the College's copy of the Great Tournament Roll of Westminster, a record made of the tournament Henry VIII held in honor of the birth of his son Arthur by his Queen, Catherine of Aragon.  It was the quick view of a riderless horse in the scroll that led me to believe this was a funeral procession, but I am told that there are also a few riderless horses in the Great Tournament Roll.]

An edition (the 1622 edition, I believe, but I can't be sure of that) of Ralph Brooke's A Catalogue and Succession of the Kings, Princes, Dukes, Marqauesses, Earles, and Viscounts of this Realme of England, since the Norman Conquest, to this present yeere

The College's copy of the original of The Armorial of Haiti, republished  by the College in 2007)

A large (vellum, I assume) pedigree of Admiral Horatio Nelson (signed by Lord Nelson himself)

At just over six minutes, it's a short clip, but of interest to heralds and heraldry enthusiasts alike.

It can be found on-line at https://www.youtube.com/watch?v=zbJgqHFTR5U

Email ThisBlogThis!Share to TwitterShare to FacebookShare to Pinterest
Labels: College of Arms, England