Pictures of Heralds (and a Lot of Others)


Saw a series of photographs over the weekend, an exhibit called "The Queen's People," an exhibition of a series of photographs by Hugo Rittson Thomas, that was really petty cool.  Each subject, if you'll pardon the pun (or even if you won't!), including Her Majesty Elizabeth II, was photographed "in the round" in that you can see front, back, and both sides.  (It was all done with mirrors and careful placement of the lights.

The photographs of particular interest to heraldry enthusiasts are number 28, the Earl Marshal (who is the heralds' "boss"), number 29, Thomas Woodcock, Garter Principal King of Arms, in full uniform and tabard, with baton (below) (the captioning has some pretty gross errors.  The photograph below was captioned "Gater King," which makes him sound like the ruler of a Louisiana swamp!  Though, of course, that would be "Gator King"), and number 26, Michael O'Donoghue, York Herald. 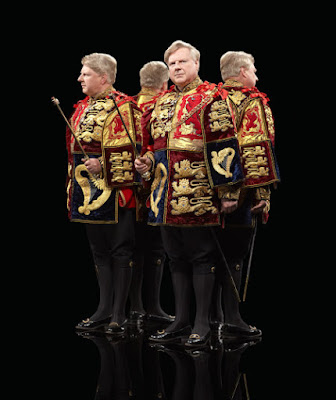 You can find the entire series on-line on the website of The Telegraph at http://www.telegraph.co.uk/news/picturegalleries/royalty/11778089/The-Queens-People-New-exhibition-by-photographer-Hugo-Rittson-Thomas.html and a smaller selection (but with fewer errors in the captions!) at the website of The Guardian at http://www.theguardian.com/uk-news/gallery/2015/aug/02/the-queens-people-portraits-by-hugo-rittson-thomas-in-pictures

Don't forget to look at all of the photographs there; it's a great series, and you really get to see a lot of the people who work for the Queen in one capacity or another.