A Scottish Call to Arms


There are some sports enthusiasts in Scotland who seem to think that the Lord Lyon King of Arms shouldn't have any authority over the emblems used by Scottish football (what we Americans call "soccer") clubs. 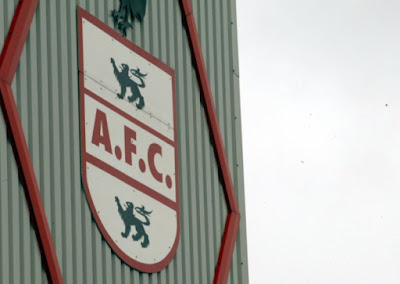 The article, "Call to arms over threat to Scottish club badges" by Colin Telford, gives some background into the controversy, which began with a letter from the Lyon Court's Procurator Fiscal to the Airdrieonians Football Club (above)about their use of an "heraldic device" as their badge, and gives a short list of some of the limitations that Lyon imposes on such badges.

However, rather than learning more about the laws of heraldry and the jurisdiction of the Lyon Court and then trying to see how these sports clubs can work within that framework, he ends up by calling for a petition to remove corporate bodies and community groups (say, for example, football clubs) from the bailiwick of the Lord Lyon and have these entities register their insignia as trademarks instead.

And then there's the Comments section.  While there are some supporters of the Lyon Court in there by folks with a greater understanding of both heraldry and the history of the heralds in Scotland, many of the comments are more like this one:


Time for the Lord Lyon, a hangover from the mediaeval era, to shuffle off into the twilight of history. What's more important, that sports clubs be allowed to operate freely, for the benefit of their communities, or that a few old crusties should pretend they still have a role in the modern world? I'm not so young myself but these people need to get out of contemporary Scotland.


("Old crusties"?  How dare he talk about my friends Elizabeth and Mark and the other heralds at the Lyon Court that way?  Harrumph!)

All in all it's an interesting article, and one worth reading whichever side of the controversy you favor.  If you'd like to read it in its entirety, it can be found on the website of The Scotsman at http://www.scotsman.com/sport/football/latest/call-to-arms-over-threat-to-scottish-club-badges-1-3746851