The (400 Year Old) Colors of Heraldry

A reader kindly pointed me to the recent (January 13, 2015) post by Heather Wolfe on the webpage of the Folger Shakespeare Library which discusses a section of a manuscript book on heraldry in the Folger’s collections (Folger MS V.a.447), compiled around 1604-1615, and written by John Guillim shortly after he was made Portsmouth Pursuivant of Arms.  Guillim is probably better known for his book A Display of Heraldrie, which went through seven editions from 1610 to 1724.  (I myself have a nicely rebound copy of the fourth edition from 1660.  Some of the pages in that edition were misnumbered because of the Restoration of the monarchy that year resulting in the inclusion of the Royal Arms of Charles II.  But I digress…)


The manuscript owned by the Folger includes such things as the order of precedence at the king’s entertainment through the city of London, March 15, 1603/4 and at its opening of Parliament, March 19, 1603/4; styles of address and the diet, at the feast of St. George, April 23, 1604; the order of the processions at the funerals of different ranks of noblemen; the duties of a king of arms; a list of those taking part at the jousts held on the anniversary of James’ accession, March 24, 1603/4; the laws governing jousts; a list of plate at Hampton Court, December 26, 1603; recipes for colors and gums needed by a heraldic painter and a list of colors used; and a page of quotations.


What caught Ms. Wolfe’s eye, and led to this post, is a subsection near the end titled, “The names of all Coloures pertaining to Lymminge,” a list of colors used for painting with watercolor-type paint. 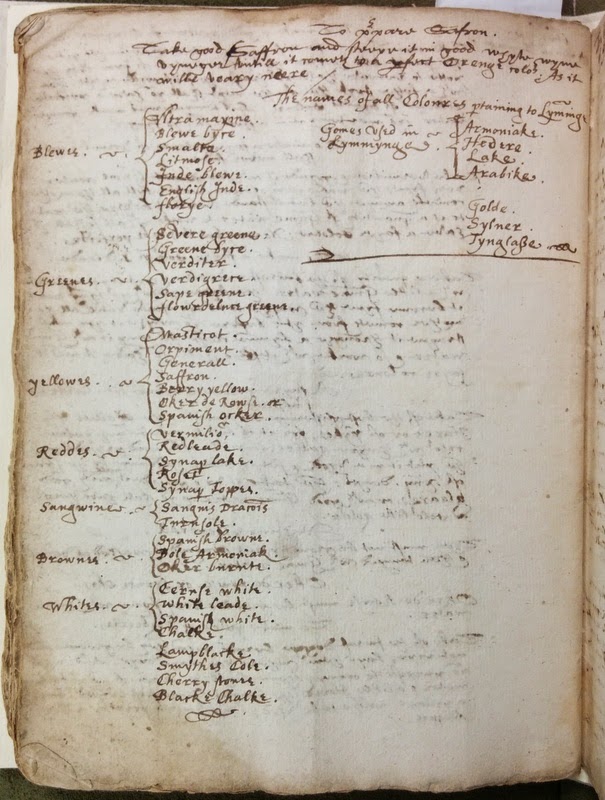 Guillim’s list of colors is on the left side of this page (a transcription is given below).  On the right is a list of the primary gums that were ground with some of the colors.  The colors he lists are:

The picture below of "the ix Feyldes or Colours," the seven heraldic tinctures (and two stains), is from another Folger Library manuscript (Folger MS V.b.74, leaf 201r), an Armorial of English families from about 1590, possibly by Sir William Segar, as it has his signature on fly-leaf as Somerset herald and again on leaf 137v as Norroy King of Arms. 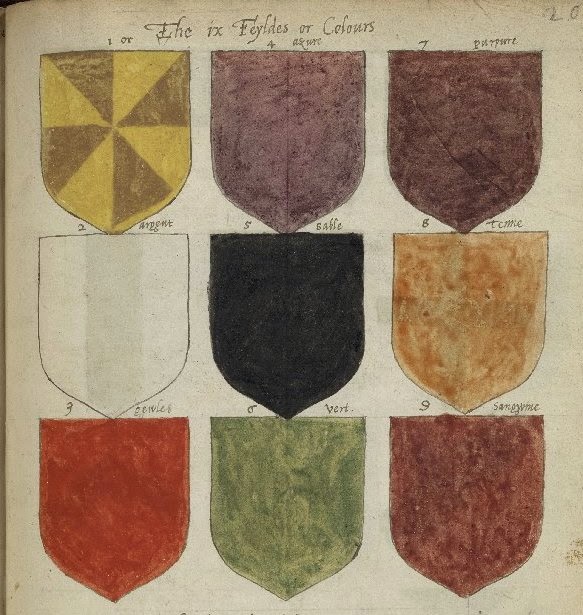 
I found Ms. Wolfe’s post to be of interest (totally aside from the fact that it demonstrates that her job is a lot more interesting than mine!) because it helps to show how heralds and herald painters looked at, and created, their colors some 400 years ago.  They are a far cry from the more standardized Pantone colors used by today’s heralds and herald painters, but I think it is, or at least should be, of interest to the modern heraldry enthusiast.


You can find the entire article, with more pictures from the manuscript (including one with the recipe for “flowrdeluce greene” at the Folger Library website at http://collation.folger.edu/2015/01/an-early-modern-color-guide/