Having gotten distracted in recent posts by "objects heraldic," we now return to last fall's trip to England and some of the heraldry seen there.

Though photography is not allowed inside Westminster Abbey itself, photographs may be taken in the cloisters, and there were plenty of heraldic memorials to photograph (and to share with you!) there.

From the website for Westminster Abbey, we find the following information about this memorial to Edward Godfrey, his two wives, and Sir Edmund Berry Godfrey.  This information and more can be found on-line at: http://www.westminster-abbey.org/our-history/people/edward-and-sir-edmund-godfrey
On the wall of the east cloister of Westminster Abbey is a memorial to brothers Edward and Sir Edmund Berry Godfrey. The shaped marble monument has a sculpted shield, crest and motto at the top, with two sculpted shields of arms on either side, identified with the names "Margaret Lambard - Thomas Lambard" and "Sarah Iles". The inscriptions are in Latin and can be translated:


"Sacred to the pious memory of Edward Godfrey, who was the 13th son but 15th child of his father, Thomas Godfrey of Hodiford, in Selling, Kent and, of his mother, the 11th son but 13th child, whom first, of her 16 children, his mother took to her breast, and who, though not weaned for upward of 3 years, yet grew to be a boy of the highest promise and ability, with a happy disposition: the first and finest of the fifth class of this school. He died the 8th day of June, year of Salvation 1640, aged 12. The most noble and reverend father in Christ, John [Williams], Lord Bishop of Lincoln, being Dean [of Westminster], Richard Busby being Head Master. Below are listed the dead, while + indicates those elected as King's Scholars"
On a separate panel below, the inscription can be translated from the Latin as:


"Edmund Berry Godfrey, raised, for his services to King and Country, to the rank of Knight, having filled the office of Justice with a singular faithfulness and diligence, was snatched at last from the sight of his kinsfolk on 12th Oct. 1678, and found on the fifth day following, having suffered an abominable and hideous death. The rest let History tell. This monument, ravaged by age, was restored, and the epitaph to his brother Edmund added, by Benjamin, youngest son and now the sole survivor of the sons of Thomas Godfrey, 2nd April 1696".
In 1678 Edmund Godfrey became involved in the Popish Plot scandal. His body was found on Primrose Hill near Hampstead on 17 October with a sword wound and it was popularly said that he was murdered by Catholics. He was buried at St Martin in the Fields, Westminster. Three men were executed for the murder but later many other theories of the cause of his death were put forward.
But, of course, is was the heraldry on this monument that really attracted my eye. 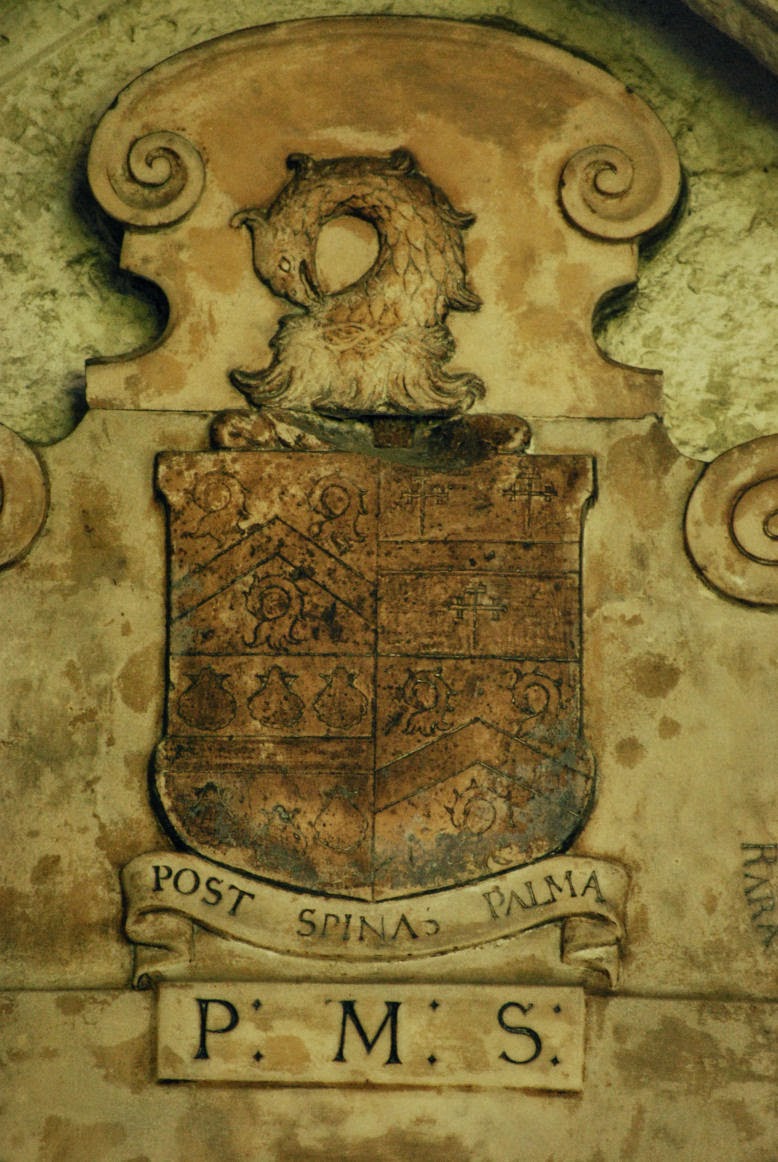 From an old book, The History and Antiquities of the Abbey Church of St. Peter, by Edward W. Brayley, published in 1823, come the following blazons of the arms on the memorial (I have modernized the spelling in the blazons, e.g., fitchy instead of fitchée):
Godfrey - Quarterly: 1 and 4, Sable a chevron between three pelican’s heads erased vulning themselves or, a crescent for difference (Godfrey); 2, Azure a fess or between three crosses crosslet fitchy argent; 3, _____ a fess between six escallops _____.  Crest: A pelican’s head erased vulning itself or.  Motto: Post spina palma (After the thorns, the palm).  (To be honest, I do not see the crescent, but the colors are much faded from this time and difficult to make out, too.) Papworth's Ordinary of British Armorials gives several possibilities for the third quarter, including Strogg/Strogge, Strogle, Stroughill/Strugell, Ilam/Ilamy, Fitz-William, and de Sancerlis.  I assume that some genealogical research into the ancestry of Edward Godfrey would let us find which, and thus allow us to know the correct tinctures for that quarter. 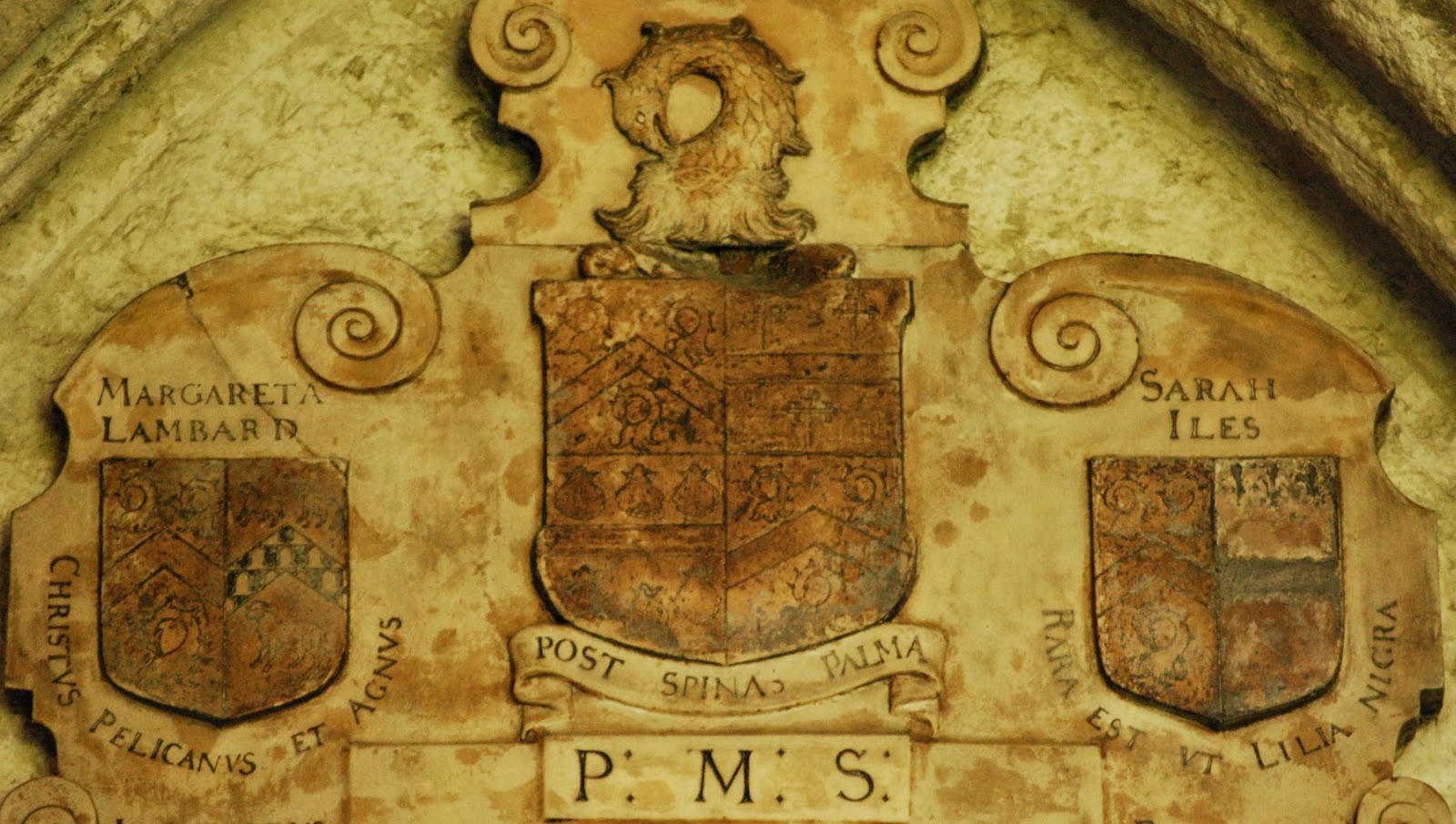