In the same room where I had spotted the colonial American heraldic embroidery that I shared in the post before last, there were also a couple of large plates with a coat of arms on them.  In the usual fashion of giving the general visitor, but not one with a special heraldic interest, about the plates, the explanatory signs with the plates read:


PAIR OF CHARGERS WITH THE ARMS OF
THE OKEOVER FAMILY OF ENGLAND
Jingdezhen, China, 1739-1742
Hard-paste porcelain

A very terse description for these: 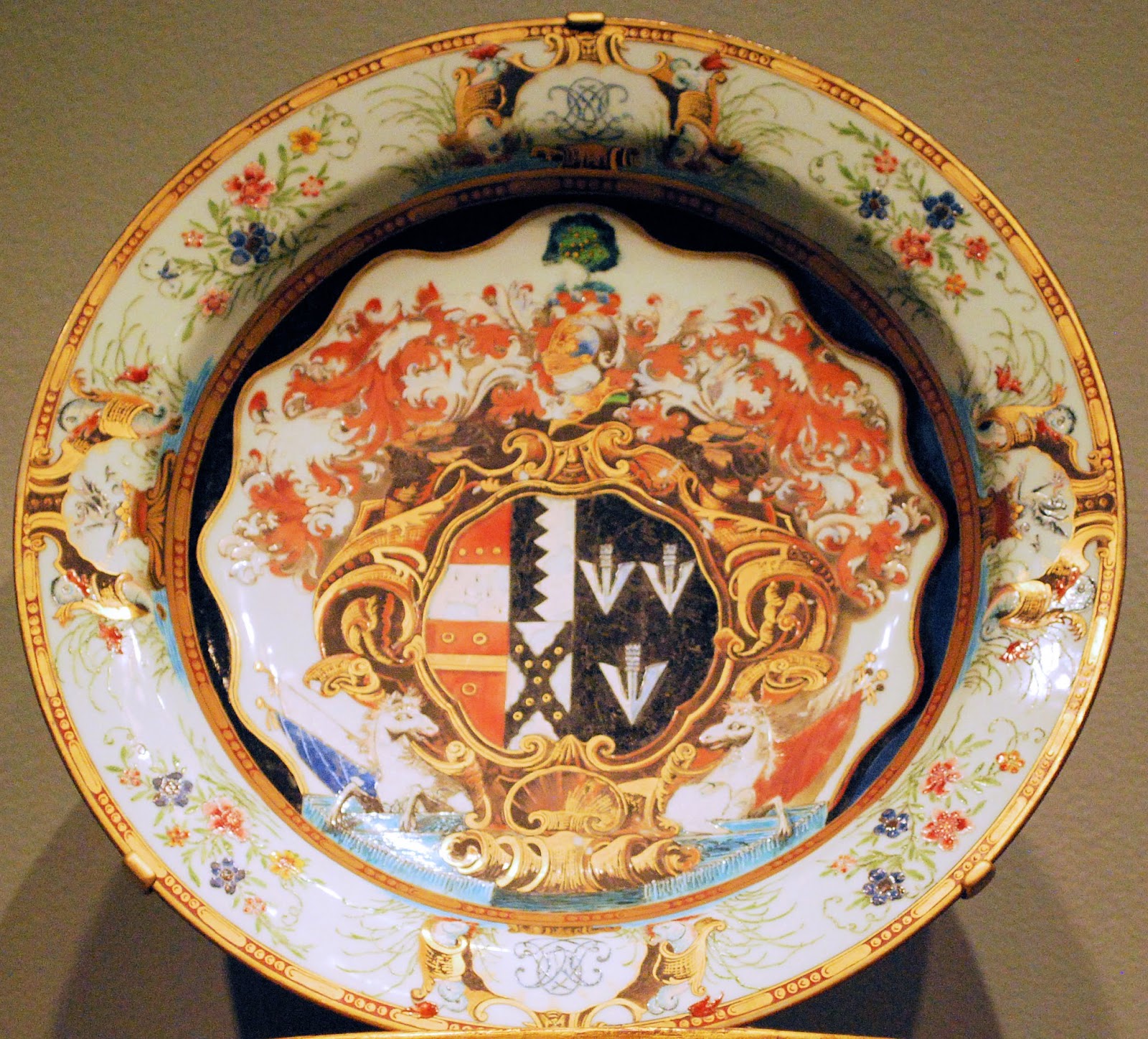 A search through the heraldic reference books back home discovered the following:

Ermine on a chief gules three bezants, the centre one charged with a mullet sable.  Crest - An oak tree vert acorned or.

The Visitation of Staffordshire, 1583 had some additional information:

Okeover of Okeover.  Quarterly, 1 and 4, Ermine on a chief gules three bezants (Okeover); 2, Per pale indented sable and argent (Atlowe); 3, Azure a bend of lozenges argent (Grin).  Crest - In a ducal coronet or a demi-dragon ermine armed gules.

With no quarter for Grin, but with the second quarter for Atlowe named, I went back to Burke and found:

With no information on the other two quarters or the impaled arms on the sinister side of the shield, I  pulled out my copy of Papworth's Ordinary of British Armorials and found the following information:

My 1939 copy of Burke's Landed Gentry gives the explanation for these arms. Under the entry for Okeover of Okeover, amongst others members of this family it cites a Rowland Okeover (1651-1730) who married "Elizabeth, dau. and heir of Sir Thomas Pettus, Bt., of Blackheath, Norfolk."  Their son, Thomas (1679-1710), married "Catherine, dau. and heir of William Leake, Baron of the Exchequer."  Thomas and Catherine's son, Leake Okeover, 1701-1765, who succeeded his grandfather Rowland, married Mary, daughter of John Nichol.

So, with the earlier quartering for Atloe/Atlow, the arms on the chargers (and presumably the chargers themselves) belong to Leake Okeover of Okeover (1701-1765) and his wife Mary (d. 1764), and represent as follows:  Quarterly Okeover, Atlow, Pettus, and Leake, marshalling Nichol.

As Leake Okeover died without issue, the estates were left to his great nephew Edward Walhouse.  When Edward died also without issue, the estates passed to the heir male, Haughton Farmer Okeover, of Okeover, and thence to his descendants.  In the interim, the arms have dropped the Pettus and Leake quarters (presumably because the current heirs are unrelated to them) but kept the Atlow quartering.

Okeover Hall, the seat of Okeover of Okeover, is in Ashbourne, county Derby.

But what I really don't know is why the National Gallery in Washington, DC couldn't, or didn't, put at least some of that information with the explanatory cards with these plates.