Another Heraldic Memorial in Temple Church


Another very impressive heraldic monument in Temple Church is that of Richard Martin (1570-1618), which bears not only a beautifully carved image but is also surmounted by his remarkably simple arms. 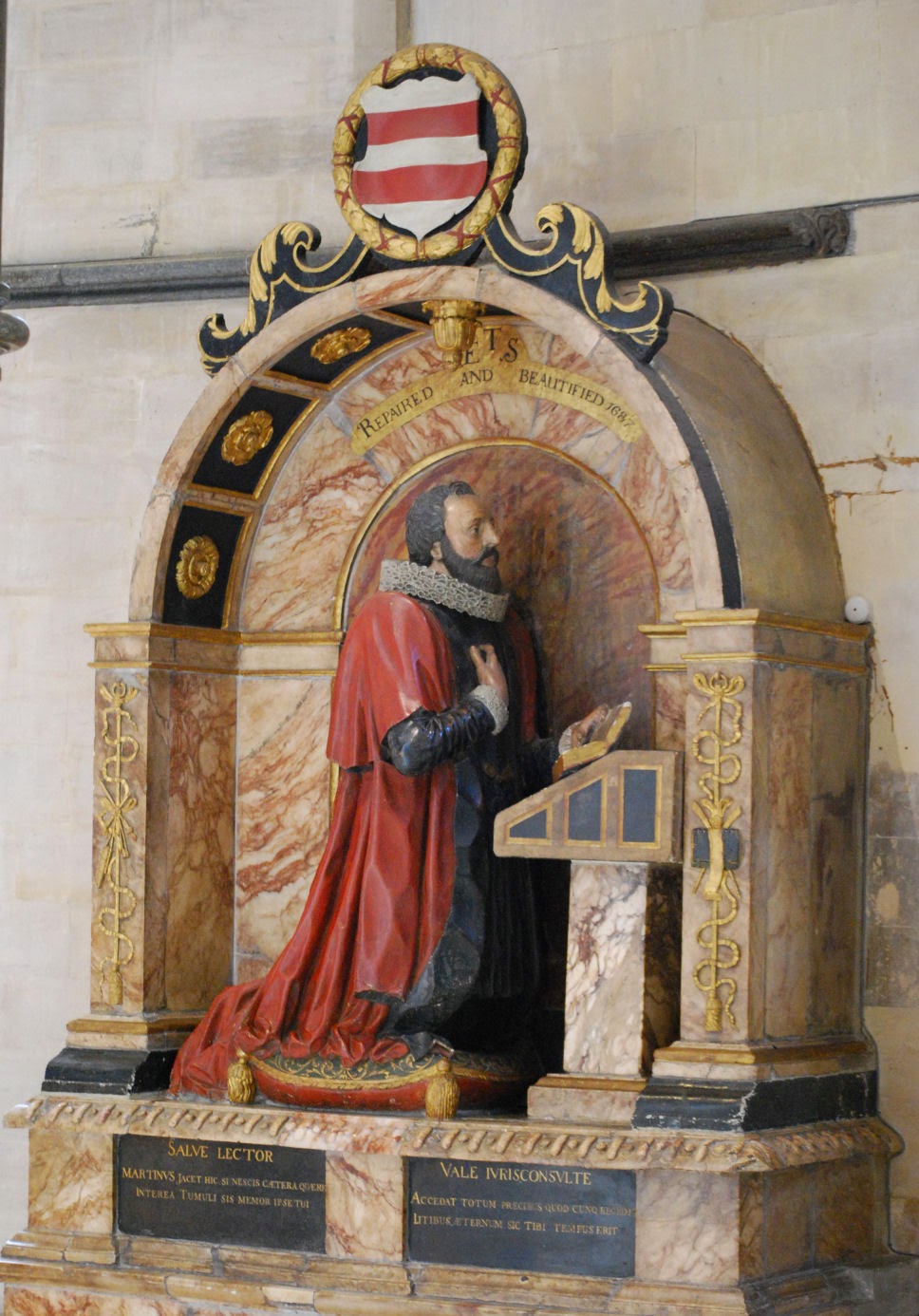 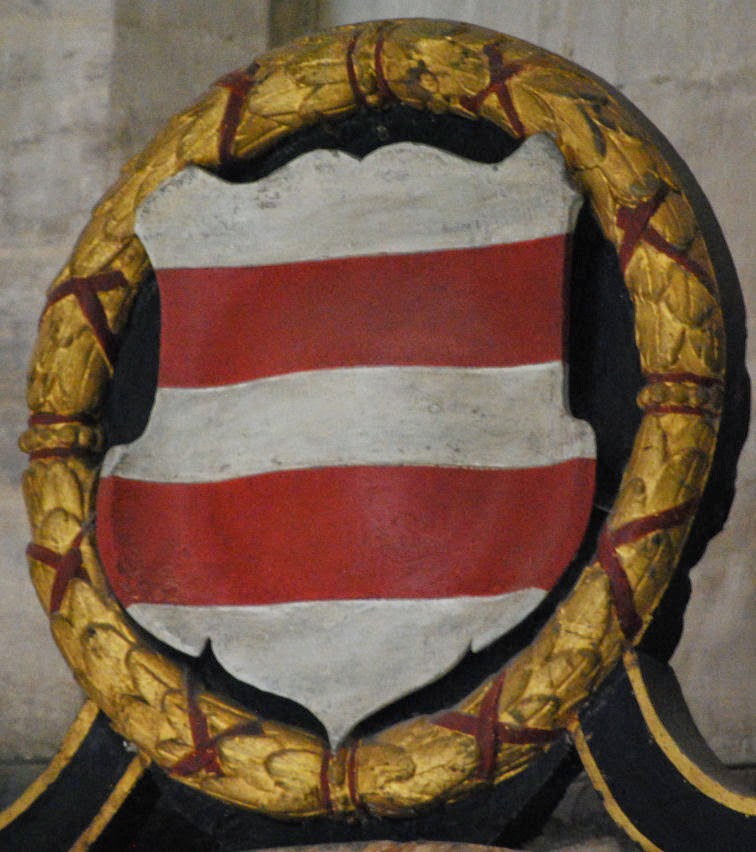 According to Wikipedia, Richard Martin was a member of a group of intellectual men, poets, and playwrights including John Donne and Ben Jonson who met the first Friday of every month at the Mermaid Tavern in Bread Street.  Martin was "universally well regarded for his warmth of nature, personal beauty, and graceful speech", and was elected "prince of Love" to preside over the Christmas grand revels of the Middle Temple in the winter of 1597/98.

In 1603, Martin was chosen to give a speech welcoming the new King James to London on behalf of the Sheriffs of London and Middlesex as part of the celebrations of the royal entry on 7 May.

He died of the smallpox, on Sunday morning 2 November 1618, and was buried in the Temple Church, London.

Here's a woodcut portrait of him done by Simon de Passe. 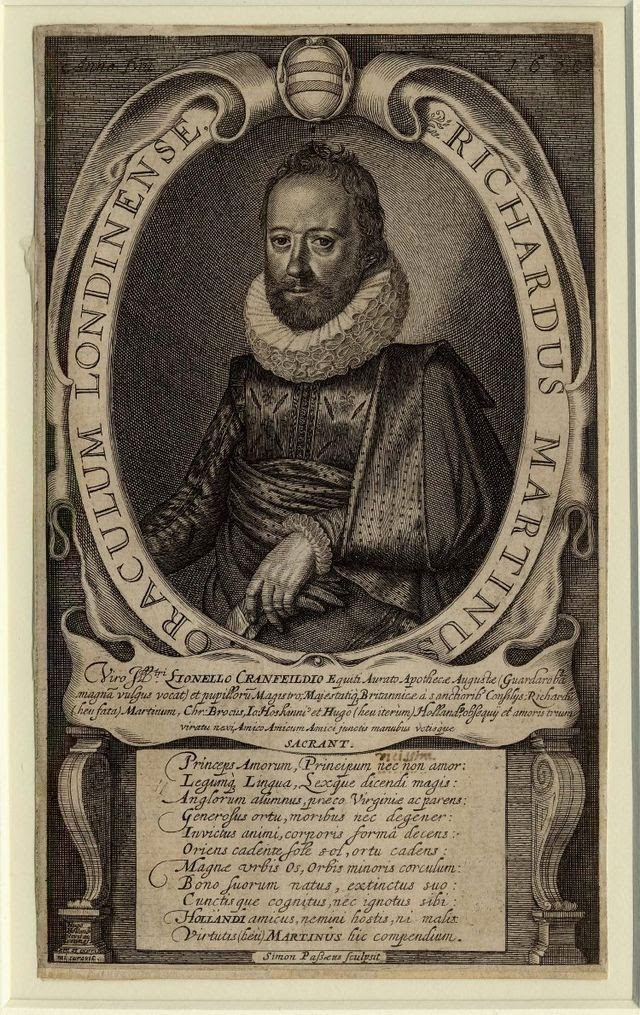 He has an entry in the Dictionary of National Biography which gives a lot more details of his life (I especially like the part about Sir John Davies writing a dedicatory sonnet to Martin but then later assaulting him with a cudgel.  :

MARTIN, RICHARD (1570-1618), recorder of London, born at (Merton, Devonshire, in 1570, was the son of William Martin by his wife Anne, daughter of Richard Parker of Sussex. He became a commoner of Broadgates Hall (Pembroke College), Oxford, at Michaelmas 1585, and was 'a noted disputant,' though he left without a degree. He entered the Middle Temple, but was temporarily expelled from the society in February 1591 for a riot at the prohibited festival of the Lord of Misrule (Archæologia, xxi. 109). Sir John Davies (1669-1626) [q. v.] prefaced his 'Orchestra,' published in 1598, with a dedicatory sonnet to Martin, but, provoked it is supposed by Martin's raillery, assaulted him with a cudgel in February 1597-8, while at dinner in the common hall of the Middle Temple. In 1601 Martin was M.P. for Barnstaple (Willis, Notitia Parl.) He was called to the bar in 1602. In 1603, on the progress of James I from Theobalds to London, he made at Stamford Hill 'an eloquent and learned oration' on the king's accession (Nichols, Progresses of James I, i. 113), which was printed (London, 1603, 4to) as 'A Speech delivered to the King's . . . Majestie in the name of the Sheriffes of London and Middlesex' (reprinted in Nichols, op. cit. p. *128f ; cf. Cal. State Papers, Dom. 1803-10, p. 7). From 1604 tilt 1611 he was M.P. for Christchurch. In February 1612-13, on the occasion of the Princess Elizabeth's marriage, he organised a masque at the Middle Temple. Martin was Lent reader of the Temple in the thirteenth year of James I (1615-16), and on 1 Oct. 1618 was chosen recorder of London. He died on 31 Oct, 1618 (cf. Cal. State Papers, Dom. 1811-18, pp. 589, 591). Aubrey says his end was hastened by excessive drinking (but cf. Whitelocke, Liber Famelicus, p. 63). Martin was buried in the Temple Church, and has an alabaster monument on the north wall, representing his figure kneeling beneath a canopy (Malcolm, Londinium Rediv. ii. 292). The monument was repaired in 1683. A portrait of Martin, engraved by Simon Passe in 1620, is in the Ashmolean Museum, and is reproduced in Nichols's 'Progresses of James I,' 1, *128, By his will (in the Prerogative Office of Canterbury) Martin left 5l. to Otterton, and 5l. to Calliton Raleigh, Devonshire, where he had a house. The mayor of Exeter was his executor (Notes and Queries, 3rd ser. i. 168), Martin had a reputation as a wit, and 'there was no person,' says Wood, 'more celebrated for ingenuity . . . none more admired by Selden, Serjeant Hoskins, Ben Jonson, &c., than he.' Jonson dedicated his 'Poetaster' to him, Wood states that Martin was the author of 'Various Poems,' of which, however, he had seen no copy. A verse 'Epistle to Sir Hen. Wotton' by Martin is in 'Coryat's Crudities.'
[Wood's Athenæ) (Bliss), ii. 260-1 ; Foster's Alumni Oxon. (1600-1714) ; Chamberlain's Letters, temp. Eliz, p. 112; authorities cited above.]


All in all, a remarkable man, who has left us a similarly remarkable monument and a bit of classic heraldry.