There is an old, and well-maintained (all things considered; after all, during WWII, the roof was bombed in!) heraldic memorial in Temple Church in London. 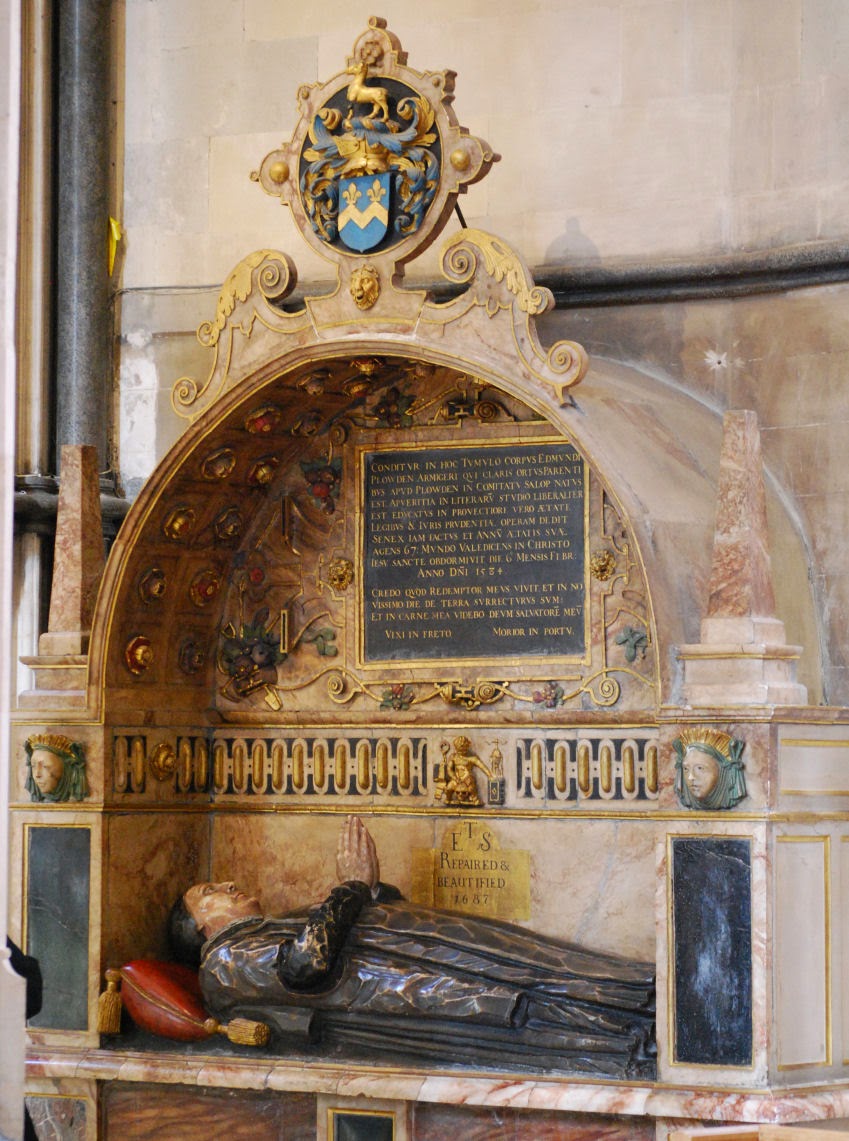 It is the tomb of Edmund Plowden (d. 1584), who was something of a legend, and even rarer, a Catholic who served Queen Mary I and remained well-known and respected despite his being a Catholic under Queen Elizabeth I, in addition to being, among other thing, the Treasurer of Middle Temple 1561-1566. 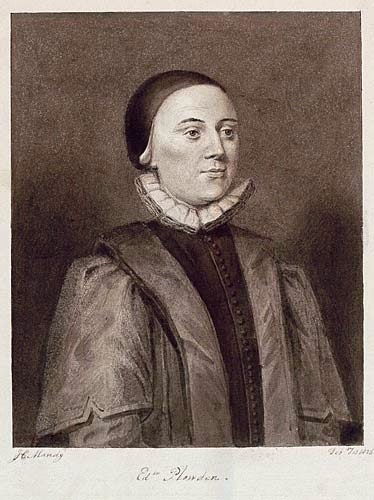 You (or at least, those of you who can read Latin) can get some idea of his accomplishments from the plaque which accompanies the memorial.  (For the rest of you for whom, like me, your Latin may be at best be called "rusty," there's more about him below.) 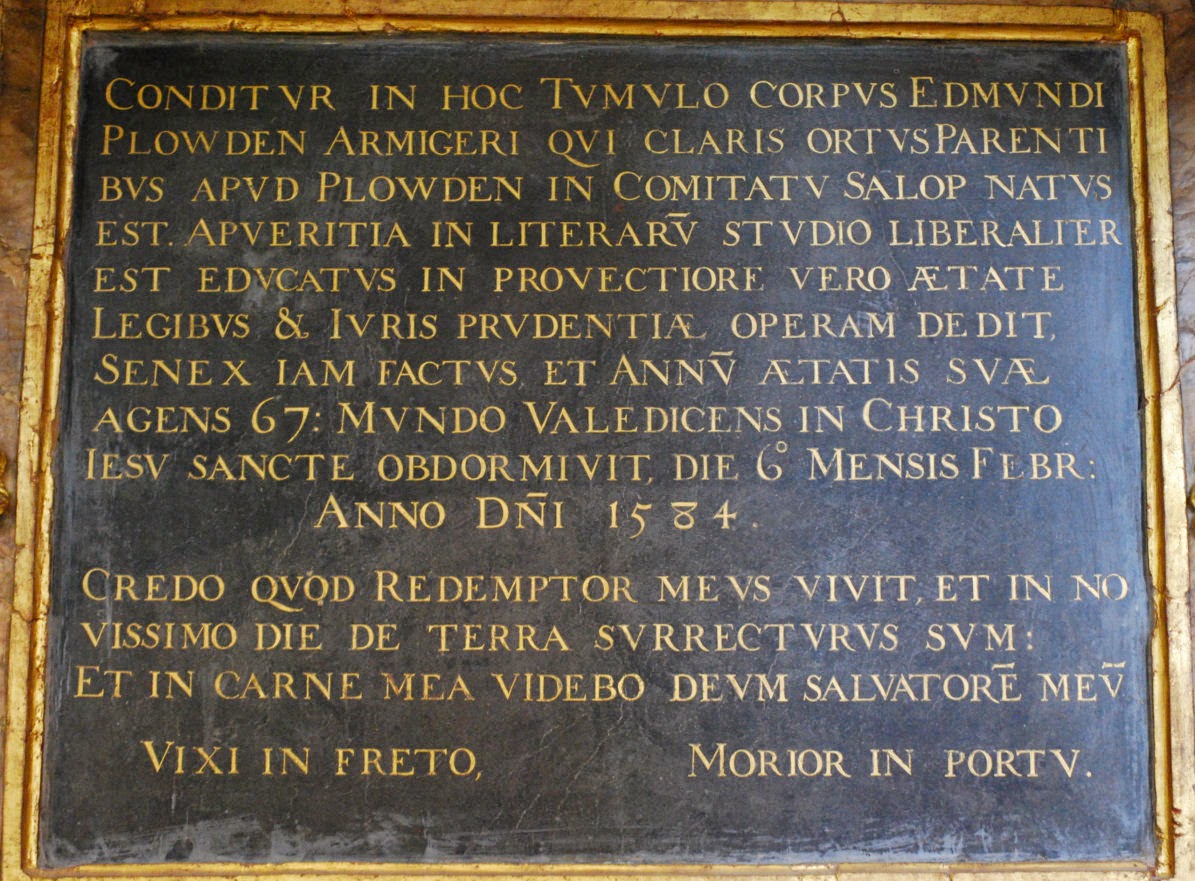 And, of course, there is a finely carved coat of arms with helm, crest, and mantling topping the memorial. 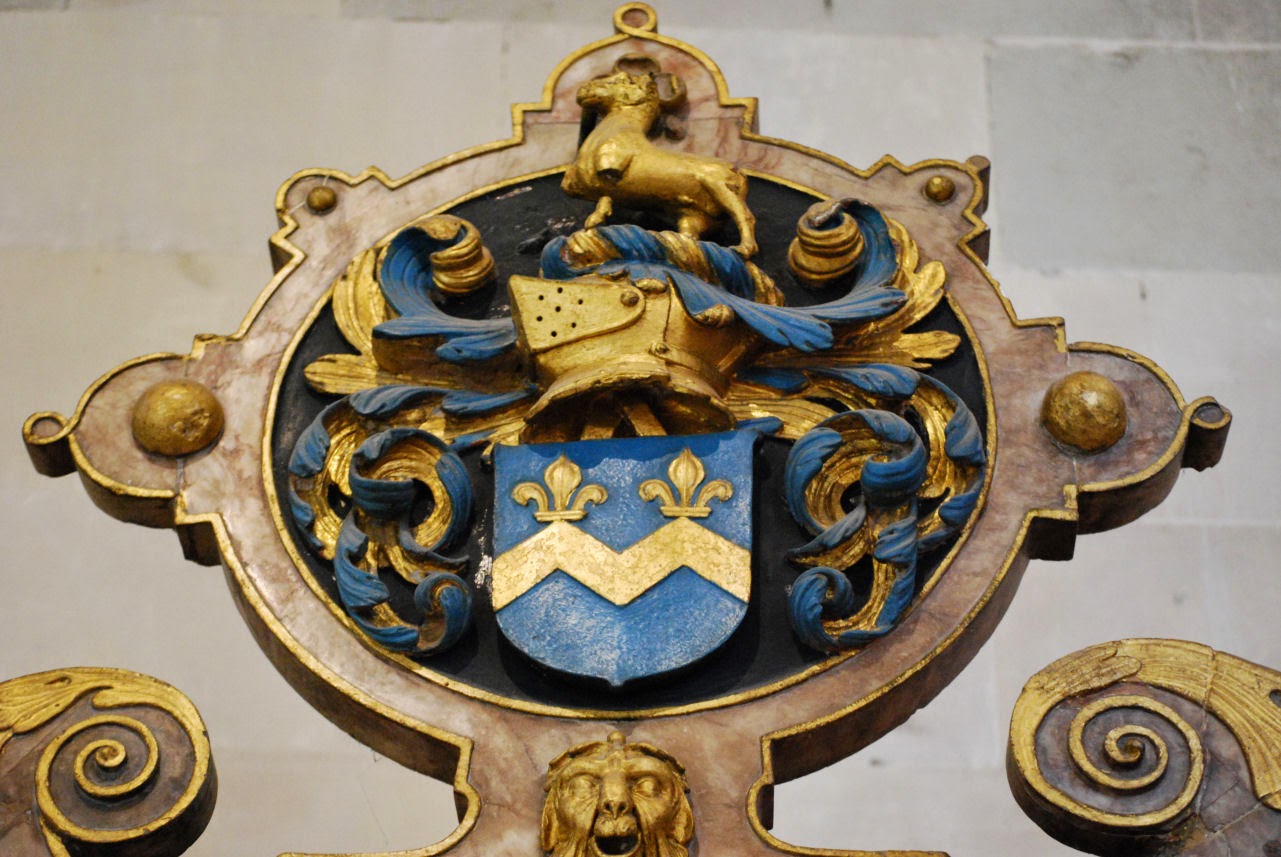 The entry in Burke's General Armory states: Plowden (Plowden, co. Salop; of this ancient family was the learned Serjeant Edmund Plowden, of Plowden, so eminent as a lawyer, temp. Mary I. and Queen Elizabeth).  Azure a fess dancettée, the two upper points terminating in fleurs-de-lis or.  Crest – On a mount vert a buck passant sable attired or.  (Clearly, the stag here has lost both his front legs and his antlers (attires) over the years, as well as having been painted entirely gold instead of black with gold antlers.)

Plowden may be most famous for the phrase, "The case is altered," which was a proverbial expression in the 17th century, as well as the title of a 1609 play by Ben Jonson. As "the case is alter'd, quoth Plowden", it is attached to anecdotes. In one of them, while defending a gentleman charged with hearing Mass, Plowden worked out that the service had been performed by a layman for the sole purpose of informing against those present, and exclaimed, "The case is altered; no priest, no Mass", and thus secured an acquittal.

He also has a very long entry in the Catholic Encyclopedia (which also mentions the story of "the case is altered":

Plowden, EDMUND, b. 1517-8; d. in London, February 6, 1584-5. Son of Humphrey Plowden of Plowden Hall, Shropshire, and Elizabeth his wife; educated at Cambridge, he took no degree. In 1538 he was called to the Middle Temple where he studied law so closely that he became the greatest lawyer of his age, as is testified by Camden, who says that "as he was singularly well learned in the common laws of England, whereof he deserved well by writing, so for integrity of life he was second to no man of his profession" (Annals, 1635, p. 270). He also studied at Oxford for a time, and besides his legal studies, qualified as a surgeon and physician in 1552. On Mary's accession he became one of the council of the Marches of Wales. In 1553 he was elected member of Parliament for Wallingford and in the following year was returned for two constituencies, Reading and Wootten-Bassett; but on January 12, 1554-5, he withdrew from the House, dissatisfied with the proceedings there. Succeeding to the Plowden estates in 1557, he lectured on law at Middle Temple and New Inn; in 1561 he became treasurer of Middle Temple and during his treasurer-ship the fine hall of that inn was begun. His fidelity to the Catholic faith prevented any further promotion under Elizabeth, but it is a family tradition that the queen offered him the Lord Chancellorship on condition of his joining the Anglican Church. He success-fully defended Bishop Bonner against the Anglican Bishop Horne, and helped Catholics by his legal knowledge. On one occasion he was defending a gentleman charged with hearing Mass, and detected that the service had been performed by a layman for the purpose of informing against those who were present, whereon he exclaimed, "The case is altered; no priest, no Mass", and thus secured an acquittal. This incident gave rise to the common legal proverb, "The case is altered, quoth Plowden". He himself was required to give a bond in 1569 to be of good behavior in religious matters for a year, and in 1580 he was delated to the Privy Council for refusing to attend the Anglican service, though no measures seem to have been taken against him. His works were: "Les comentaries ou les reportes de Edmunde Plowden" (London, 1571), often reprinted and translated into English; "Les Quares del Monsieur Plowden" (London, no date), included in some editions of the Reports; "A Treatise on Succession", MSS. preserved among the family papers. Its object was to prove that Mary, Queen of Scots, was not debarred from her right to the English throne by her foreign birth or the will of Henry VIII. Several MSS. legal opinions are preserved in the British Museum and the Cambridge University Libraries. He married Catherine Sheldon of Beoley and by her had three sons and three daughters. There is a portrait effigy on his tomb in the Temple Church, and a bust in the Middle Temple Hall copied from one at Plowden.

Quite a man, and a wonderful heraldic monument to him.  I'm glad that I was able to see (and photograph) it during our trip to London.