Merry Christmas to Me!


What a great Christmas this is!  I have been able to order, and have received (just in time for Christmas!), two heraldic books that I have been looking forward to for some time now.


First, the fourth, and final, volume of the Dictionary of British Arms: Medieval Ordinary is now available, and has arrived at my door early last week.  (An ordinary is a collection of coats of arms arranged according to their designs, as opposed to an armorial, which is arranged alphabetically by surname.) 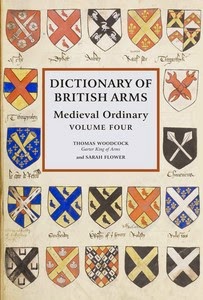 I’ve been looking forward to this final volume for quite a while.  I bought Volume 1 when it was first published in 1992; Volume 2 was acquired in 1996 when it became available; Volume 3 was added to my heraldic bookshelves in 2009; and now I have Volume 4, published this year, to go with them.


The four-volume set is the result of a bequest to the Society of Antiquaries in 1926 for a new edition of Papworth's Ordinary of British Armorials, for many years the primary resource for the identifying English coats of arms.  (Papworth is another book that graces my shelves, and is well-thumbed through.  At the time I bought it in the mid-1980s, it was only available as a fairly expensive book that had to be shipped across the Atlantic from England.  Now, of course, it is possible to read or download a copy in .pdf format from the internet, from either the Internet Archive or Google Books.)


The four volumes of the Dictionary cover English heraldry in the period before the beginning of the heraldic visitations in 1530, so there is a lot of later heraldry that it does not cover. Its publication means that people interested in medieval arms will be able to identify accurately the arms that they may run across. Even more helpful, each volume contains a surname index, making it useful as an armorial, too.


If you are interested in more information about this volume (or the earlier ones), please feel free to drop by the website of publisher Boydell & Brewer (the only relationship I have with this firm is that I’ve given them a fair bit of money over the years) at http://www.boydellandbrewer.com/store/viewItem.asp?idProduct=14643


Second, the companion book to the Folger Shakespeare Library's recent (July-October 2014) exhibition on Symbols of Honor: Heraldry and Family History in Shakespeare's England has finally been made available to the public.  Not having had the opportunity to visit the exhibition (and the Library's gift shop!), as soon as I saw that it was available, I got on-line and ordered my copy of Heralds and Heraldry in Shakespeare's England, a collection of essays by various authors about aspects of the title subject, edited by Nigel Ramsay. 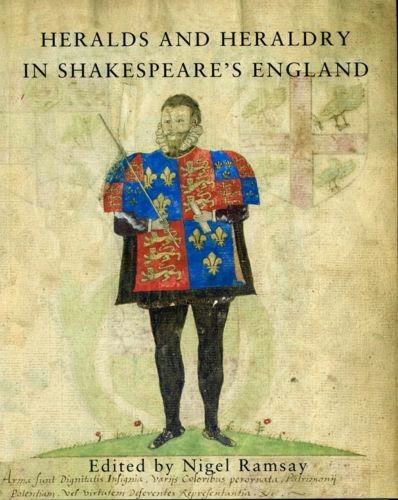 Alas, I was going to recommend that if you wanted a copy of this wonderful volume for your own heraldic libraries, that you go to the website of the Folger Shakespeare Library (http://www.folger.edu/), click on the "Shop" tab at the top of the page, search for "heraldry," and get your own copy from them.  But a quick search of my own to verify those steps came up with three results, none of which are Heralds and Heraldry in Shakespeare's England.  It is possible that it was a comparatively limited run of this title and that sometime after I bought one, they ran out.  Or, hopefully, it's just a temporary problem, and you'll be able to find them there in the near future.

For now, all I can recommend if you would like to learn more about this book, or acquire a copy of your own, to do a search for the title on-line; I did find a few copies available for sale that way (one on eBay; another listing was from a bookseller in New York).

In any case, it looks to be an interesting and informative volume, and I'm looking forward to reading through it over the next little while.