Well, at least according to a recent article in the National Post.

Tristin Hopper's article about Canadian heraldry (you may have seen links to it on Facebook; at least three different people I know of discussed it there) appeared in the on-line version of the Post on March 27, is a great overview of heraldry, and how it is prospering in Canada. 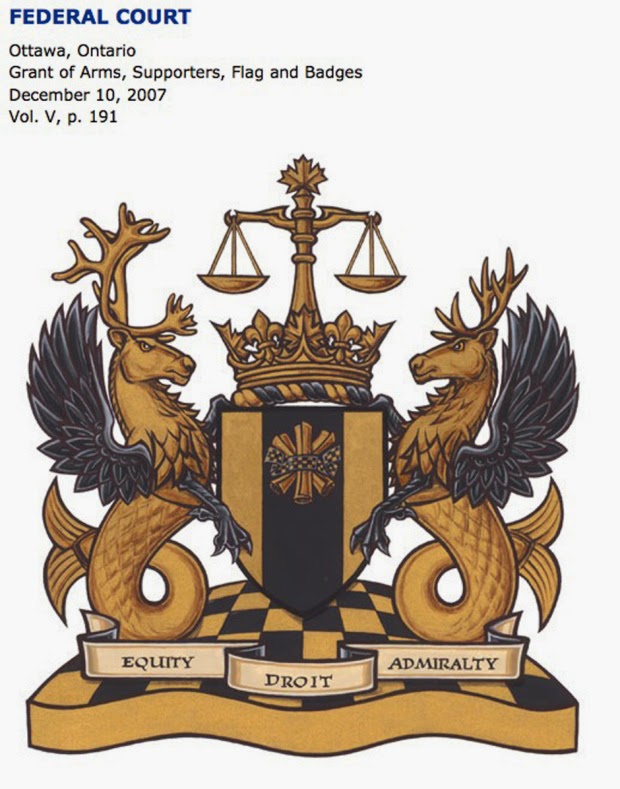 The author seems particularly taken by the innovative monsters often used as supporters to Canadian grants of arms, such as the winged sea-caribou in the arms of the Federal Court, above, as well as the use of aboriginal or First Nations symbols and motifs.

The article is profusely illustrated with examples, most screenshots taken from the Register of Arms, Flags, and Badges which can be found on-line at the website of the Governor General.  Mr. Hopper clearly did a fair bit of research and interviewed Claire Boudreau, the Chief Herald of Canada, and David Cvet, past President of the Royal Heraldry Society of Canada.  There is also a short (albeit somewhat awkwardly phrased) quote from the author of this blog.

I also found the comments and discussions among some of the readers in the commentary section below the article to be of interest.  Many seem to feel that the Canadian Heraldic Authority is doing a great job of keeping heraldry alive and "fun" in the 21st Century.  Indeed, one commenter, Robert Addington, noted that a personal acquaintance of his, John Brooke-Little, believed that heraldry should be fun.  Indeed, a quote I am fond of recalling appears in Mr. Brooke-Little's An Heraldic Alphabet and states: "You can study heraldry until you are azure ... in the face but inevitably discover, from time to time, that you really are quite vert.... I have found this over and over again but, never forget, herein lies the fun and if heraldry ever ceases to be fun - chuck it."  Sage advice from a great herald.

If you would like to see Mr. Hopper's article about how visually stunning -- and fun -- Canadian heraldry is, the full article can be seen on-line at: http://news.nationalpost.com/2014/03/27/how-canada-became-home-to-some-of-the-worlds-more-visually-stunning-and-fun-heraldry/