The (Incorrect) Arms of the United States


I know, I told you I was going to leave this topic alone.  But I'm still doing research for my proposed paper on the arms of the United States, and I keep running across examples where, as they say down here, "it's just not raht." 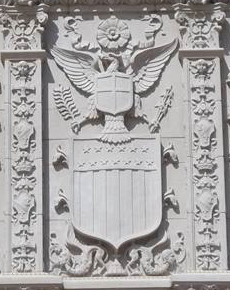 This example comes from the facade of the San Diego, California, Museum of Art.  (It's a great exterior for heraldry; the example above is only one part of the building, and it's got a lot more heraldry than this panel shows.)

Once again, it's got the right number of stripes (13, although the last one to heraldic sinister - to the right as you look at it - is harder to make out), but like so many other examples, it also placed 13 stars - a row of six and a row of seven - on the chief, which in the actual arms of the United States is plain blue.

Then, too, it looks like they've taken the eagle supporter and turned it into a crest, sitting atop the shield, supporting on its breast an entirely different coat of arms.  Without hatching or anything else to give us clues as to the tinctures, it's hard to guess what this secondary coat of arms is supposed to be.  Is it St. George?  (Argent a cross Gules.)  For that matter, why is the cross so thin, instead of a wider cross, which is more to be expected of the only charge on the field?  Is that a bordure around the shield, or is that just the shield's delineation, as appears in the arms of the U.S. below the eagle?

There are other unanswered questions, too.  Why is there a rose above the eagle's head, where the crest of the United States (a constellation of 13 stars appearing in a glory) would normally be expected to be?  Why are there 17 leaves on the olive branch held by the eagle?  (In the U.S. arms, there are 13.)  And why are there only six arrows in his sinister talon?  (Again, the expected number is 13.)  (Are you seeing a pattern here with the number 13?  Good, you should.  The achievement was designed that way.)

Okay, I'll go shut up once again about the many inaccurate depictions of the arms of my native country.  At least until I can't stand it anymore and just have to share some particularly egregious example with you.  (It's like the cartoon about the man sitting at a computer, with his wife's voice coming from the other room asking him if he's coming to bed.  "I can't come to bed yet; someone is wrong on the internet!")