On Wednesday, September 26, 2012, those attendees of the International Congress of Genealogical and Heraldic Sciences (attendance at which is the reason we were in Maastricht then) who desired had the opportunity to take a day trip to Aachen, Germany and a couple of other places.  I always try to go on one of the offered daytrips at the Congresses; you can see and learn so much.

One of things that I learned on this trip was that there isn't a whole lot of heraldry at the cathedral in Aachen.  There's some, along with a whole lot of really impressive mosaics, and of course, Charlemagne's throne, which looks really uncomfortable to sit on.  (They don't let you sit on it to find out for yourself, but its made of stone and all sharp corners internally, so how comfortable do you think that would be to have to sit on?)

I did, however, run across a coat of arms that I had no idea I might see there.  Indeed, I'm still (months later) not sure why it's there.  It was on the facade of a Uhren Schmuck store (they sell watches and jewelry).  Here's the relevant portion of the facade.

Recognize those arms on the right? 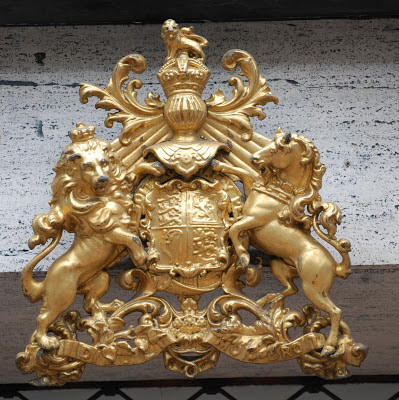 Yes, the Royal Arms of the United Kingdom of Great Britain and Northern Ireland, in use since the accession of Queen Victoria.  (Except that the unicorn supporter seems to be missing its horn.)  And why are these arms on the front of a store in Aachen, Germany?  I don't have a clue.  Even if Uhren Schmuck were purveyors of watches or jewelry to one of the British royal family, this is not the way that such a status is normally displayed. (The expected version would be a colored rendition of the Royal Arms along with the text "By appointment to," in this case, Her Majesty, Queen Elizabeth II.)  Was the store formerly something English and just left up when it changed owners?  Is it just a pretty design that Uhren Schmuck is using there?  Or is there some other reason for it?  I don't know.  But there it was, surprising me on my walk from the tour bus to the cathedral.  Surprise!