Puttering about on the internet as I do sometimes, I occasionally run across a blog post in one place or another that relates to heraldry.  And just such a serendipitous find occurred today, when I ran across an old (April 2010, so nearly three years old now) post at Gordon Napier History on the coats of arms of the Grand Masters of the Knights Templar.

Yes, I believe that some of these arms may be somewhat speculative, and the history of the order is not without its own controversies.  Still, the author of the post included a bit of history of the order, a listing of its grand masters and some of their duties, and a nice graphic of their coats of arms, which I thought worth sharing with you. 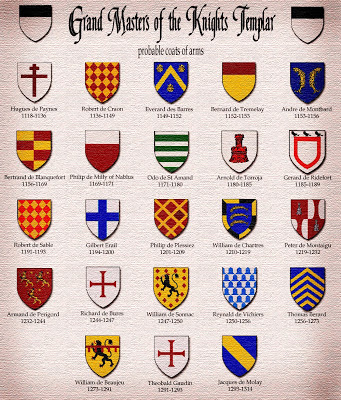 The post, "Grand Masters of the Knights Templar," can be found on-line at: http://gordonnapierhistory.blogspot.com/2010/04/grand-masters-of-knights-templar.html