There was a nice little article last month (December 25, 2012) about Sir William Strickland, the man who is believed to have introduced that New World bird, the turkey, into England, which included a photograph of the lectern in the village church where he is buried which bears his coat of arms and a carved representation of his crest, which was (wait for it!) ... a turkey. And here are more images of his arms (and crest) found on the internet. 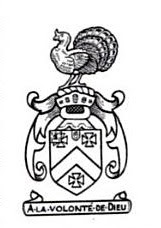 The full article can be found on-line at: http://www.bbc.co.uk/news/uk-england-humber-20672110  But don't you just love that lectern?