Some Real, Not Reel, Heraldry

Well, this was fun!  For those of us here in the States, the third season of the British series Downton Abbey has finally begun to air here.  And as part of the run-up to the broadcast of the first episode of this season (which has already ended its run in Britain, I believe), the Public Broadcasting Service aired a BBC special about the real-life home which plays the role of Downton Abbey, entitled Secrets of Highclere Castle.  While I was able to watch the special when it aired, I was not, alas, able to get any screen shots of some of the heraldry to be found in this home to George Herbert, the 8th Earl of Carnarvon, and his wife Fiona Herbert, the Countess of Carnarvon.  (For those of you who think that you might recognize the name, yes, the current Earl's great-grandfather was the Lord Carnarvon, the 5th Earl, who financed Howard Carter and the discovery of the tomb of Tutankhamen early in the last century.)  Fortunately for me, and thus for you, PBS uploaded the entire episode so that it could be viewed from the internet, and I managed to grab the following screen shots for this post here, which I have mentally subtitled "Some of the Heraldry of Highclere Castle."

The arms of the Herberts, Earls of Carnarvon, are blazoned as Per pale Azure and Gules three lions rampant Argent (sometimes, armed and langued Or).  The crest is A wyvern, wings elevated Vert, holding in the mouth a sinister hand couped at the wrist Gules.  The supporters are:  Dexter: A panther guardant Argent semy of torteaux and hurts, flames issuant from the mouth and ears Proper.  Sinister: A lion Argent.  Each supporter ducally gorged per pale Azure and Gules and chained Or, and charged on the shoulder with an ermine spot Sable.  The family's motto is: Ung je servirai (I will serve one).

And here is a nicely carved wooden image of the arms, properly hatched, surmounted by the coronet of an earl: 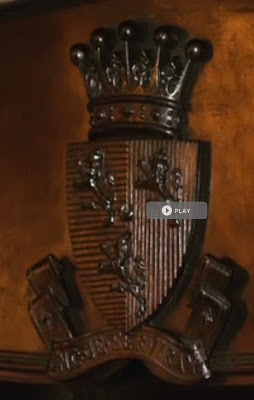 Next are three shots from different viewpoints of the main hall in the castle, a three-story atrium with a minstrels gallery decorated with coats of arms from the current and former residents. 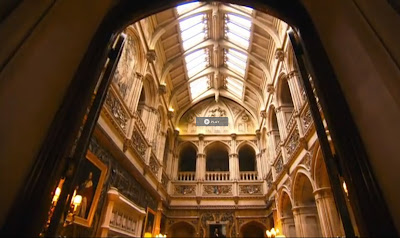 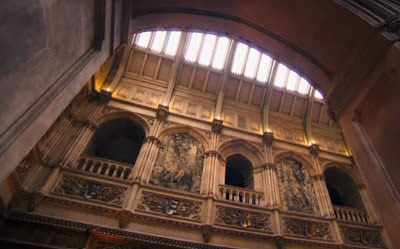 And here are close ups of three of the coats of arms from the gallery. 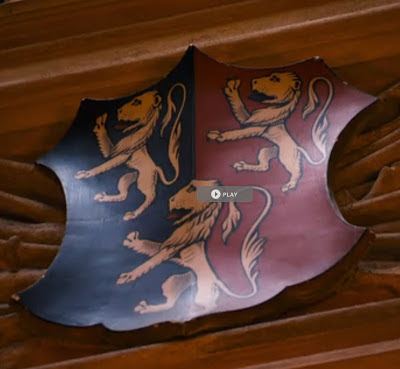 This first one is, of course, arms of Herbert, Per pale Azure and Gules three lions rampant Argent. 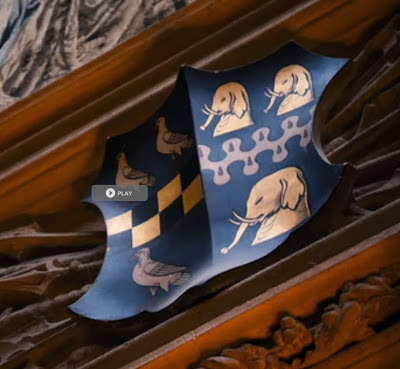 This second one is Azure a fess compony Or and Sable between three seapies Argent (Sawyer, co. Cambridge or Causton, co. Norfolk) marshalled with Sable a fess nebuly Argent goutty de sang between three elephant’s heads Or (Suckling, London).  (The identifications are from Papworth's Ordinary of British Armorials.) Nothing I could find in my copy of Burke's Peerage (I have the 1938 edition) gave me any clue as to what relationship any of these families may have had with the Herberts. 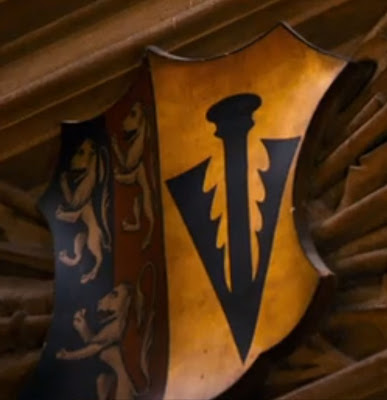 The third one is Herbert marshalled with Or a pheon Sable (Sharpe or Sidney/Sydney, according to Papworth).

Another really nice bit of heraldic decoration in the castle were a couple of embroidered firescreens. 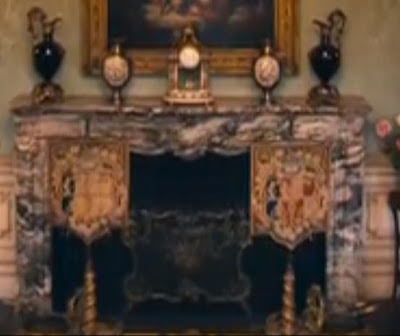 Unfortunately, while the Herbert arms can be made out on the dexter (to the left as you look at them) side of the firescreens, neither of the images I was able to capture is clear enough to be able to adequately identify the arms on the sinister side (to the right).

In this (short) look at some of the heraldry of Highclere Castle, I did save what I consider to be the best for last.  This is the achievement of arms over the main entrance to the castle itself, with the arms surmounted by the coronet of an Earl, the supporters on either side, and the motto below.  It also looks to me like there is a circular recess above that coronet that may once have held the crest. 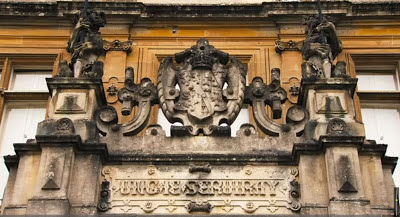 The arms are Herbert marshalled with Molyneux Howard: Quarterly, 1 and 4, Azure a cross moline quarter-pierced Or, 2 and 3, Gules on a bend between six crosses crosslet fitchy Argent an escutcheon Or charged with a demi-lion rampant pierced through the mouth by an arrow within a double tressure flory counter-flory Gules.

All in all, an impressive display of several hundred years' worth of the heraldry of a family!  If you wish to see the special itself, I found it on-line at http://video.pbs.org/video/2320059755