A Castle With Heraldry

Another place we visited and got to spend some good time wandering through was the Kasteel Hoensbroek near Hoensbroek, a town in the municipality of Heerlen, The Netherlands.

It's a bit of a tourist trap now, as you can see from the banners flying outside the castle.  And though the oldest parts of the buildings date to about 1360 (especially the round tower), a number of major additions were made in the 17th and 18th Centuries, long past the time of the armored knights on horseback shown (with the lion facing to sinister on the shield!) on the banners. 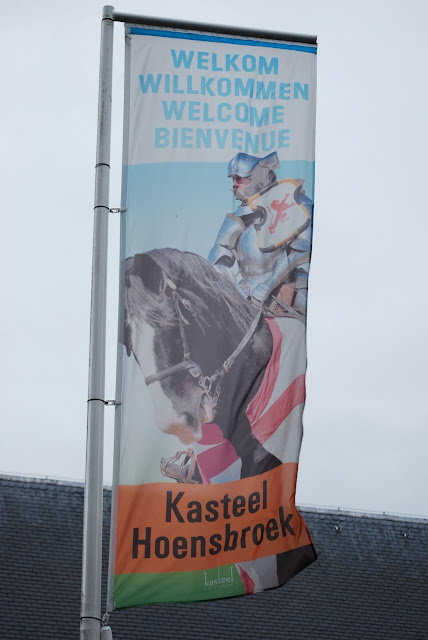 Still, there was some good heraldry to see and photograph there; the following two pictures are the Hoensbroeck family coat of arms (Quarterly, one and four, four bars overall a lion rampant crowned, 2 tow and three, quarterly; marshalled with Quarterly, one and four, a closed barnacle or breys, and two and three, a rabbit rampant) over the main entrance to the castle (with the date 1643) and over another doorway in the courtyard (with the date 1640). 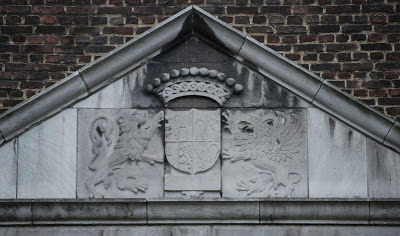 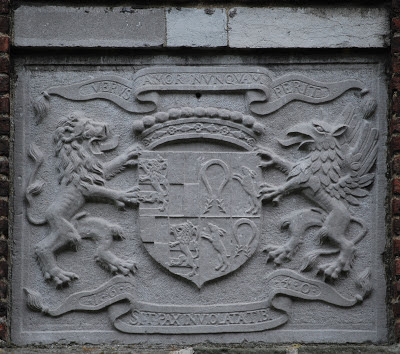 The castle was sold in 1927 to the present owner, the foundation Ave Rex Christe.  The foundation's logo-style "arms" appear in this achievement, along with a shield of the unquartered Hoensbroek arms and another shield with crossed battleaxes, and with dates indicating the year of purchase (1927) and the date of another major restoration effort (1988). 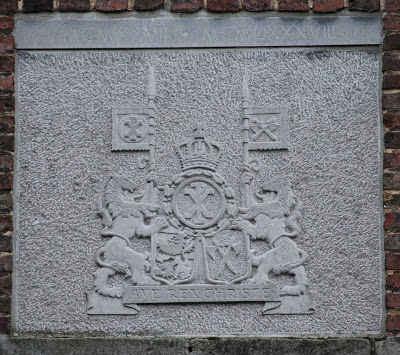 Finally, one of the nicest artifacts (heraldically speaking, of course!) they had on display in the castle was this old seal matrix on a red velvet pillow in a glass case, along with a seal impression (in something white; perhaps plaster?) next to it so you could see what it would look like.  It bore, of course, the unquartered Hoensbroek arms, blazoned in Rietstap's Armorial Général as: D'arg. à quatre fasces de gu. (Haren); au lion de sa., arm., lamp. et cour. d'or br. sur le tout (Howen van den Broeck).  [Argent, four bars Gules (for Haren); overall a lion rampant Sable, armed, langued and crowned Or (for Hoen van den Broek.] 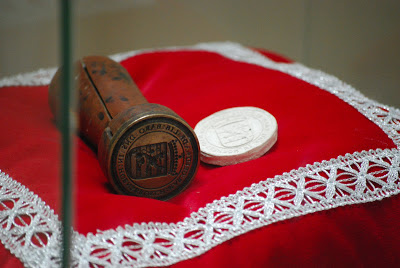 Interestingly enough, the coat of arms of the town of Hoensbroek is a blue shield charged with a gold angel who is holding the family arms of Hoensbroek.  (Image from Wikipedia.) 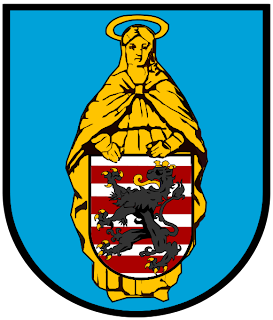